Is it wrong to use “genocide” as a verb?

Just so you people don't think of me as a monster. I ask this question because recently I was playing NetHack and there is a magic scroll that allows you to genocide a species of monsters (usually evil bad ones that want to hurt you, like a master mind flayer).

I was trying to convey this to my friends by saying. I am having a good game so far I genocided over 16 types of monsters. They scoffed at me saying this was incorrect as genocided is not a word. What word should I use then in this case?

I've also noticed the game itself uses the word genocided, so I am not sure If they are correct or the game is correct with the usage.

If it's a large group you've killed, then 'massacred', 'slaughtered', or particularly 'exterminated' would work better. Genocide has no past tense as it's not a verb.

Your friends are telling you that they'd rather you spared them the details of your quest to retrieve the Amulet of Yendor from the Mazes of Menace.

Genocide as a verb is Nethack jargon. By repudiating this usage of the word, they are showing you that they do not wish to be associated with the community of Nethack players.

In general English, while genocide does appear as a verb in print, it does not seem to have been accepted into the standard lexicon. And I hope it never will be -- I don't want to live in a world where we have a need for such a verb.

This actually ties in to some more general issues, so I'll start with a brief discussion of them.

The first parallel I thought of is suicide, which like genocide is mainly used as a noun. The corresponding verbal expression is normally to commit suicide; it's relevant that the verb to suicide actually is attested, although it's extremely rarely used and clearly not the preferred option. (See the following questions: Can one conjugate and use 'suicide' as a verb?, Difference between “commit suicide” and “suicide”)

Possibly more relevantly, the OED also has a couple of citations for homicide used as verb, one from 1470 and one from 1858.

The word genocide was coined relatively recently (in the 20th century), and the OED only has an entry for it as a noun. 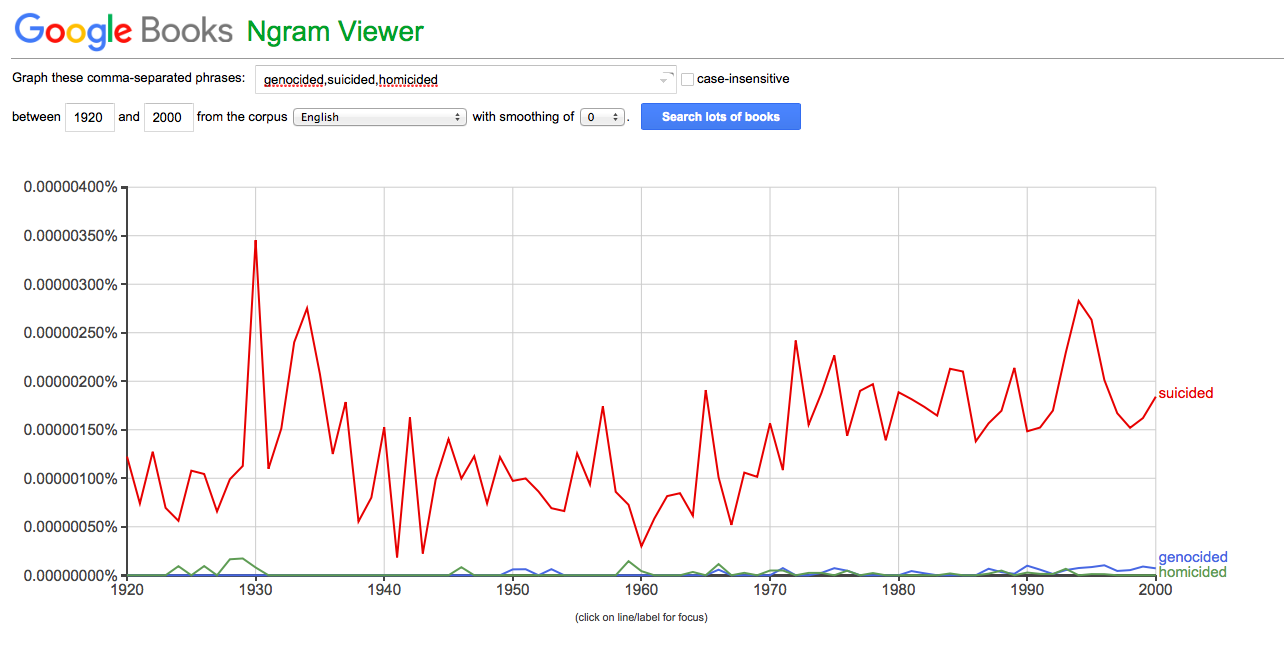 My conclusion is that

I agree with the others who have said that genocide used as a transitive verb is understandable, but sounds ineloquent and informal or uneducated.

When you use the expression "commit genocide," you can't have a direct object. The equivalent to "I genocided over 16 types of monsters" can be expressed in more than one way, but you need to use a preposition of some sort.

The first I thought of, and the one that has been most commonly used according to the Ngram Viewer, is against: "I committed genocide against over 16 types of monsters." Other options include commit genocide on and commit genocide upon.

The direct answer to your problem is that you should have said that you collected 16 different types of "Genocide Scrolls" and then used them.

While I understand the use of genocide is regarding a game, something that has gone unnoticed is that genocide is the wrong word to use altogether. The word genocide comes from the Greek word genos which translates to race or people and the latin suffix cide, meaning killing of. Therefore the word genocide means the killing of people and alternatively the killing of a race. Taking this into account, when you start killing another species, it is not genocide. Extermination is the correct word and would be able to be changed to exterminate, exterminating or exterminated. Maybe the initial posters friends were scoffing because the word genocide was used to talk about humans killing creatures other than humans and therefore was the wrong word to use in the first place, regardless of whether it was a verb or a noun.

20
Difference between “commit suicide” and “suicide”
13
Which nouns can be used as verbs?
7
Can one conjugate and use 'suicide' as a verb?
0
“Umbrella” as a verb?

34
Types of things vs. types of thing
5
What is an “anecdote” as opposed to a “joke”?
4
“Too” as a sentence modifier
15
Is it acceptable to call a hot dog a sausage?
5
Usage of the word “genocide”
3
Is my use of “oblivious” wrong?