Word for "Source of Unpleasant Disclosure"

I want to describe a kind of object, ideally a person. It's for a person who verbally discloses something that deeply troubles another. A possible state of mind for the listener is given well by this article's definition of aporia:

One might say the speaker caused or induced the listener to have an anagnorisis, defined by WP to be

a moment in a play or other work when a character makes a critical discovery... Aristotle defined anagnorisis as "a change from ignorance to knowledge, producing love or hate between the persons destined by the poet for good or bad fortune."

But what is a noun to describe the speaker? If the so-called listener brings this grief upon himself, I have found a phrase I like from the works of Nietzsche to describe him: the "Don Juan of knowledge". As this translation describes: 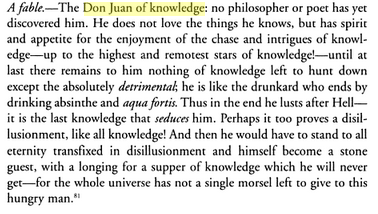 Given the destructive attitude in that passage, words like bully or agitator come to mind if someone imposes this on another. And there are times when the unpleasant revelation is a hostile disclosure: In the film Galaxy Quest, extra-terrestrial Mathesar mistakes fictional television shows for documentaries, and seeks sci-fi actor James Nesbitt's (who does not tell Mathesar about his mistake) help against the evil reptilian Sarris. When Sarris learns the truth behind this ploy, he forces Nesbitt to tell Mathesar that Nesbitt has been pretending the whole time about being a starship captain.

There is a slightly more neutral disclosure where the exchange is relatively unmeaningful to one party but deeply troubling to the other. A modern example of this is found in the Internet meme (best to assume this link is NSFW) Overconfident Alcoholic, where OA boasts, is shot down or put back into place by an off-screen character, and then enters a state of depression. The off-screen character may not have meant to upset OA as severely as he did; maybe he was just being playfully hostile and talking smack, for example. But this character has also given his listener an unpleasant revelation.

There can be unintentional disclosure where the revealer does not fully know what he's doing. The child in Andersen's The Emperor's New Clothes is an example of this. The boy declares the king is wearing nothing, implying that the king was conned by the tailors he hired. The king's response is embarrassment, which is not as severe as the emotional response I wish to convey with my word. But this story is an example of unintentional, unpleasant revelation.

There are examples of well-meaning disclosure that backfired, if only temporarily. Some are in Knowles' A Separate Peace: In a fit of jealousy, Gene impulsively causes Finney to suffer an injury that shatters Finney's dreams of becoming an athlete. Finney holds Gene in high regard and refuses to believe that he caused the accident, even when Gene tells him so in private. Later, other boys at the school stage a mock trial for Gene, which upsets Finney to the point of injuring himself further.

And there are cases of noble disclosure, where the revelation is unpleasant but means well and soon helps the listener. Dickens' A Christmas Carol has several instances of this: The tortured spirit of Marley, who comes to warn Scrooge away from his fate of exile, for one. The other ghosts, too, have something like this: the first ghost shows Scrooge the life he could have led; the second ghost shows him disturbing personifications of Ignorance and Want. These all played their part in Scrooge's reclamation but the ghost I want to describe is the third, who shows Scrooge a vision of the cold and opportunistic reception to Scrooge's death. Scrooge is troubled so deeply by this unpleasant disclosure that he feels moved to drastically change his way of life

“Am I that man who lay upon the bed?” he cried, upon his knees.... “Spirit!” he cried, tight clutching at its robe, “hear me! I am not the man I was. I will not be the man I must have been but for this intercourse. Why show me this, if I am past all hope!”

Here are some terms I have come up with, and why I think they do not fit:

Given the literary examples above, I suspect there is a term related to anagnorisis to describe the object (or device) that motivates it. My ideal term would be for a person, but one for an object works too.

Is there a formal name for "source of deeply unpleasant disclosure"?

How about this word: Provocateur? A person given to malapropisms could give you the unintentional quality you're looking for. I can't see how you could reconcile these unparadoxically.

"Gadfly" is the word for this. It was famously used to describe Socrates. I'm not sure gadfly can convey unintentionality though.

7
Word for "non-unpleasant"?
3
Is there a term for the stereotypical Japanese ghost girl with a white dress and long black hair that mostly covers her face?
0
When people use words that have nothing to do with race to refer to race
3
Word for a dish that looks unpleasant
3
Word for feeling for movie characters
2
What is the recipient of a disclosure called?
2
A word for the unpleasant taste in the mouth after sleeping uncomfortably
0
Is there a word for excessive greed?
0
Single word for "level of revealed knowledge"