Do they mean the same?

Which one describes more accurately the yellow spots of the following bird? 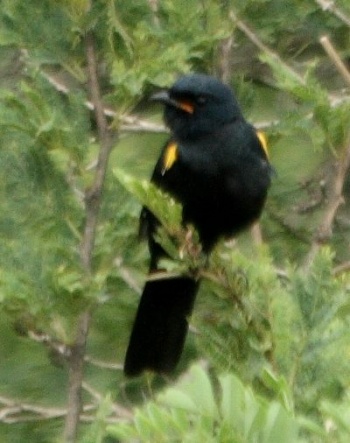 (Other alternatives are welcomed too).

The most accurate description would be a yellow spot on each wing.

Two yellow spots on its wings.

This would give me the idea that there might be two spots on each wing.

A yellow spot on both wings.

I think this is correct, and it does make clear to me that there is one spot on each wing, but it may also be read as one yellow spot extending over both wings.

The main thing is, when we are talking about birds, we know they generally have two wings. You might even describe it as:

A yellow spot on the wing.

And people would assume (as birds tend to have identical, if mirrored) wings, that this goes for all wings the bird possesses.

Another option, and I think the most readable, would be

A yellow spot on each wing.

I would avoid mentioning the total number of spots, as you will risk confusing people: does two spots mean two spots per wing or two spots per two wings.

As a long-time birder, I'd reject both in favor of "...yellow patch evident on wings during flight." But I'm guessing you just selected 'birds' as a random "prop" for your usage question.

“Two yellow spots on its wings”

This is vague, as it could mean two spots on each wing, or two spots in total, on its wings. Replace the word "two" with "three" and it'd be even more confusing: three spots on each, or two on one, one on the other?

“a yellow spot on both wings?”

In short, the latter phrase is slightly less complicated, but it is recommended to simply say "a yellow spot on each wing".

Not the answer you're looking for? Browse other questions tagged word-usage ambiguity or ask your own question.

2
Word choice for a comparison of different amounts
2
Double meaning of "Short" for object dimensions
1
Single word for creating changes in the composition of a group
0
"Both your work": both and non-transforming plurals
5
Correct usage of word "reason" with "twofold"