Is there a word for replacing foreign words with English substitutes?

On tonight's broadcast of NPR's All Things Considered, host Robert Siegel interviewed Ralph Keyes, who "writes about words for American Scholar magazine." The topic was a contest run by the magazine to find suitable English replacement words (neologisms, in this case) for four words which have been borrowed into English but have entered common parlance to varying degrees: mensch, frisson, schadenfreude, and sympatico/sympathique.

While the proposed neologisms were on the whole underwhelming, I did come to wonder: is there a word for the conscious replacement of foreign words with English substitutes, either as an editorial action in a specific work or as a broader, sociolinguistics endeavor? 'Anglicization' came to mind, but I think of that more with respect to spelling or pronunciation (i.e., not wholesale word replacement). Is there a term for this process?

(Incidentally, isn't it the French who have a semi-governmental process to guard against foreign word borrowings, at least as far as the official language,mwhatever that means, is concerned? If so,mother obviously 'anglicization' can't be right, assuming this French body performs a similar effort to replace foreign words with French alternatives, officially or un....)

But English doesn't need nor tend to Englishize foreign words. Not any more. Or much less so than in the past.

Think of the relatively new Italian words adopted by English: cappuccinos; latte; espresso; paparazzi; la dolce vita; and simpatico. They're easy to pronounce, they need no explanations, they make the speaker sound cultured and worldly.

Englishize/Englishise; 1 To make English in manner or in language: ‘the Englishised Indian’ (Blackwood's Magazine, 1922).

Plus I discovered another reference dated 1813 which suggests that the term Englishise is not so fanciful or so recent as suggested by @fumblefingers in the comments below. The book is entitled:

Historical and descriptive Accounts of the Ancient and Present State of Ragland Castle. By Charles Heath. The sixth edition. 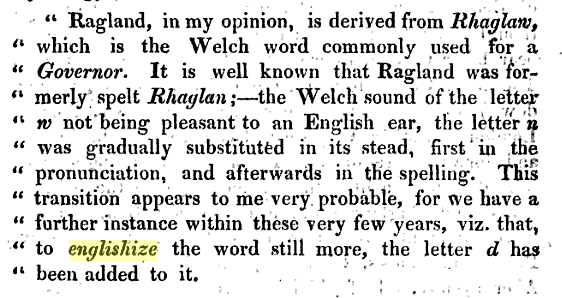 Therefore, it appears that the term Englishize (or englishis/ze) although less common than Anglicize, is accepted and is a more than valid alternative.

I don't know if there's a word, but there is a belief called linguistic purity in English that advocates for the use of native English words over foreign ones. Foreign words can be translated into English, creating a calque that is derived from the other language. Interestingly, the Wikipedia article notes that "calque" itself comes from French.

10
Visceral English words
4
What is a term for someone who prohibits the importation of foreign words into their language?
2
replacing "connected" with a more informal word
3
Is there a term for saying 'all countries outside the United States' without using the word 'foreign'? (used with international audience)
1
A word for "foreign entity with local traits"
0
Replacing "When" With "For / Since" In A Question?