Word for a portmanteau made of two synonyms

Is there a word for a (possibly accidental) portmanteau of two synonyms?

For example, say, you contract "liberty" and "freedom" to "liberdom".

I'm pretty sure there isn't one. Answering in the negative in such cases is fraught (it's not like I can examine every use of English ever and confirm that there is no such word), but portmanteau in this sense is relatively recent in itself, is something I come across a fair amount, and the synonym case is a common example.

If there is a term out there for such portmanteaux, it's probably a portmanteau.

If anyone really needed to coin a term for such, I'd suggest "Gladstone Bag", going back to the first coinage's roots to coin the other.

I think we can call it a blend by lexical selection or a blend error. Because this specifically happens when you combine two words that has a semantic similarity (mostly synonyms) rather than phonological similarity.

Blending may occur with an error in lexical selection, the process by which a speaker uses his semantic knowledge to choose words. Lewis Carroll's explanation, which gave rise to the use of 'portmanteau' for such combinations, was:

Humpty Dumpty's theory, of two meanings packed into one word like a portmanteau, seems to me the right explanation for all. For instance, take the two words "fuming" and "furious." Make up your mind that you will say both words ... you will say "frumious."

The errors are based on similarity of meanings, rather than phonological similarities, and the morphemes or phonemes stay in the same position within the syllable.

Definition: Blends are a subcategory of lexical selection errors. More than one item is being considered during speech production. Consequently, the two intended items fuse together.

From the book "The Evolving Lexicon By Andrew Thomas Martin": 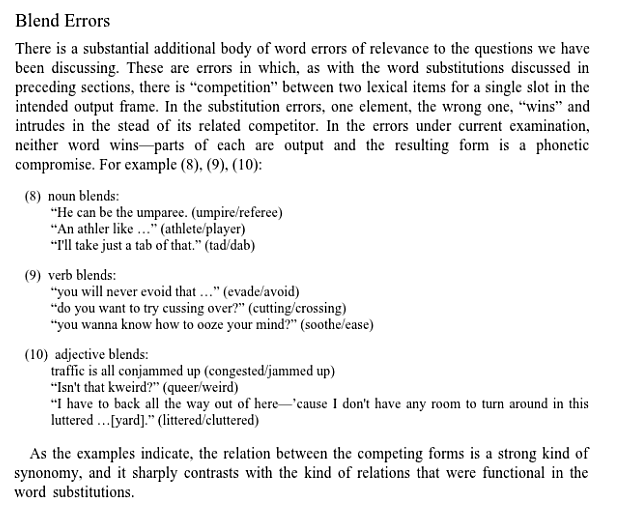 In a few sources, it is mentioned as "synonym blend" as well.

From the book "Slips of the Tongue and Language Production edited by Anne Cutler":

From the article "Spoken word production: A theory of lexical access" by by WJM Levelt:

Not the answer you're looking for? Browse other questions tagged synonyms terminology portmanteau-words or ask your own question.

3
Is there a specific name for a portmanteau of two alternative spellings?
17
Term for a word that is unintentionally made up of two or more other words?
1
Is there a term specifically applying to a three-word portmanteau?
5
Why isn't portmanteau spelled portemanteau?