What is the origin of the phrase “liner notes”?

Liner notes is a phrase describing a written description on the cover of an LP record. What is the origin of this phrase?

Liner notes, strictly speaking, belong on the paper liner into which the LP is placed before both are placed into the album sleeve. The phrase can be extended to refer to any notes that came with the album.

Liner notes were printed on the thin paper sleeve (the "liner") a vinyl record is placed inside, sometimes before placing inside a cardboard outer sleeve.

The first quotation of liner notes in the OED is from 1955 and as an abbreviated liner in a 1953 definition, but I found an earlier example in a Billboard magazine album review from 10 April 1948 (page 37): 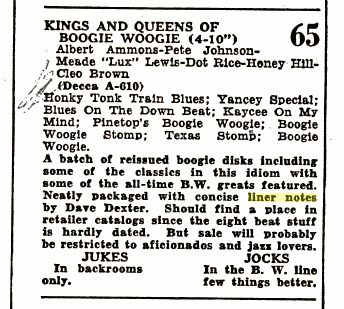 A batch of reissued boogie disks including some of the classics in this idiom with some of the all-time B.W. greats featured. Neatly packaged with concise liner notes by Dave Dexter. Should find a place in retailer catalogs since the eight beat stuff is hardly dated. But sale will probably be restricted to aficionados and jazz lovers.

Inside the LP cover there would usually be a thinner paper cover protecting the LP. This is the liner.

I suspect at one time appreciative or informational notes on the LP would have been written or printed on that liner? –