Fishing terminology: What phrase describes a fish getting caught on the hook?

I know nothing about fishing, but I need to describe what happens when a fish snaps at the bait and gets hooked. Specifically, what does the hook do? Does it catch? Does it burrow? Does it seat itself? Does it embed itself? I'm looking for vivid, evocative phrasing, not a dry, technical description.

Also, what does a fisherman do to ensure the fish is hooked properly and won't jump off the hook? What terms describe this action?

"Nibble" refers to a seemingly tentative attempt to take the hook and can be used as the event takes place or in later descriptions. Nibble is often used in a derogatory ( self-deprecating) fashion as in "I (he) caught 3 fish, but he (I) only had a couple of nibbles." This is most frequently used when "still fishing" (just letting the hook dangle instead of pulling it through the water) with "bait" (see below).

"Bite", when used as the event takes place, could be a moderate or normal attempt to take the hook, but is often used synonymously with "strike" or "hit". When used in later descriptions, "bite" is pretty much the only term I use or hear used (other than nibble).

"Strike" and "hit" are aggressive attempts to take the hook and are normally used only as the event takes place. I see those words used in print more often that I hear them spoken even when there is an obviously aggressive attack on the hook.

If I have a fish "on", then the fish is hooked, but the fish is not "caught" until I've "landed" the fish or otherwise prevented it from getting away. Deliberately letting a fish go is called "releasing" the fish and is an obvious and necessary part of a form of fishing called "catch and release".

"Snag" is what happens when I've hooked a fish that seems to have not deliberately taken the hook. Snags are most frequent around the mouth area, so the fish was likely attacking in some fashion, but the hook is embedded outside the mouth in a way that looks like there was no attempt to actually eat it. As it happens, "snag" is also used to refer to getting the hook caught in weeds, rocks, etc. and to tangled line, especially at the reel (sometimes bad enough to be called a "bird's nest").

Also, "hook", "lure", are colloquially used synonymously, for the most part. Technically, the hook is the sharpened curved bit that actually pierces the flesh and holds the fish, the lure being the (usually) metal bit that's shaped and colored to attract the fish. The assembly of lure and hook is frequently referred to as a lure or a hook pretty much interchangeably. "Bait" is something added to the hook by the fisher (worms, leeches, strips of meat, etc.).

Callithumpian suggested that I add a note on "flies". I don't know anything about fly-fishing, so I'll leave that for commentators.

While not terribly vivid, the standard term I've always heard/used for what the fisherman does is to set the hook once the fish strikes.

I usually hear people who fish a lot say a fish hits or strikes when it takes the bait.

I've always heard (and read) the term "the fish bites."

No one has yet mentioned the verb "to gaff." The verb is coined from instrument used to perform the task, itself also known as a gaff, the wicked looking thing pictured below. 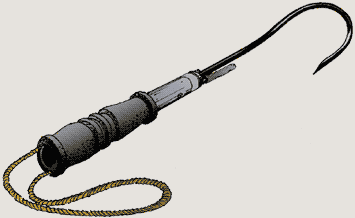 If the fish is particularly vigorous or large, a fisherman will jab this thing violently into the gills or the mouth of his catch to control and eventually subdue it until it dies of asphyxiation. However, the verb has gained wider currency than only being applicable to the cruel object from which it was birthed; it can be used as a general term to describe any hooking of a carcass, I believe. I've seen it been used to describe a butcher's work.

I have a few things to add to the very thorough response given by @RonPorter.

First of all, I agree that many fish, (particularly insectivorous species, and the predatorial pelagic species), will tend to hit or strike at a bait, or (more frequently,) at a lure.

While the word hit is reserved for the fish's action in attacking a lure or bait, it should be noted that the word strike is also commonly used to describe the action of the fisherman in setting a hook. (For example, my fiancé often admonishes me for standing there looking silly, when I should have been striking at the fish that has just taken my line).

With regard to Ron's suggestion that the word "take" describes when the fish actually becomes hooked, I tend to disagree there, because when a fish takes a lure or bait, (in other words, when it swims away with it in its mouth), it doesn't necessarily hook itself (hook up) in the process.

This concept is clearly demonstrated in what happens when a mulloway takes a live bait that you've set out (on the appropriate rig). The mulloway will take the live bait in its mouth and run with it for a short distance, before halting suddenly in order to chew the fish up a bit (to incapacitate it), then flip the partly-chewed fish around such that it may swallow it head-first.

It is only at this point, when the mulloway is just about to swallow its prey head-first, that you should strike at it in order to set your hook. (While the mulloway is running with the bait, you must always allow the line to free-spool; if you place any pressure whatsoever on the line at this point, the mulloway will feel the external input and immediately spit out your live bait).

Moving on, when a fish becomes hooked, there are several descriptors that can be used to indicate where the hook has become lodged.

Ideally, you want the fish to be hooked through the mouth, with the hook entering on one side of the jawbone and exiting on the other side, (thereby giving you a solid or firm hook-up). If the point of the hook does not pass around the jawbone, the fish is said to be lip-hooked, and you must be particularly gentle with it in order to avoid ripping the hook straight through the flesh (and therefore, out of the fish) while reeling it in.

If the fish has swallowed the hook, it can end up being either gill-hooked or gut-hooked, (the latter occurring when the hook happens to set itself in the wall of the fish's oesophagus or stomach).

If the fish has been inadvertently hooked in any other part of its body, (say through its eye, or in its shoulder), the fish is said to be foul-hooked.

To further answer your question of what a fisherman does to ensure that his/her fish doesn't jump off the hook (or shake itself free), the first step is, of course, setting the hook. After a solid hook-up has been achieved, the most critical factor is maintaining pressure on the line. As soon as you allow even the slightest bit of slack line between you and the fish, you run the risk of losing it. This gives rise to the common saying or farewell amongst fishermen: "tight lines!"

A final thing that I would like to point out is that I have never heard anyone use the words lure and hook interchangeably; (i.e, call a lure a hook)... Perhaps that is a localised phenomenon occurring within part(s) of America and/or the UK?

Apart from the lures used in fly fishing, (flies that are tied directly onto the hook), hooks are generally completely separate from the lure body.

I refer to a hard bite as a "slam". As in, "That ditch melon slammed my lure."

When they bite in a way that they end up with the entire lure in their mouth, you would say, "That swamp donkey choked it."

As far as keeping the fish on the line, or "buttoned", you would say you are "playing" the fish any time you are using finesse to keep them from breaking your line or "winching" them when you are using a power technique with heavy hooks and line. "Lipping" is when you land them by grabbing their bottom lip. "Gaffing" is when you use a special tool, called a gaff, to haul them into the boat. This is done primarily with saltwater fish. "Boat-flipping" is using the fish's forward momentum to lift them out of the water and into the boat. This is most often done with non-keepers that you want to unhook and throw back as quickly as possible so you can get back to fishing.

6
What word or phrase describes pulling a fish out of water?
0
A word used to describe a fish trying to eat bait bit by bit
0
Is "taking him going away" a common fishing phrase?