What is the exclamation “Why, I never!” a contraction of?

The exclamation "Why, I never!" is a well-worn exclamation (I think more common in Britain than in the US?), often used to express indignation upon having been accused of something.

The structure of the sentence suggests that this exclamation is a contraction of something like "Why, I never [verb]!" or "Why, I never have [verbed]!". I know that there may not be a canonical verb in the original sentence that was contracted to give this exclamation, but I was wondering what possibilities might exist.

(It's worth noting that it is difficult to search for this exclamation, because it tends to be swamped by unrelated constructions like "Why I never walk alone at night" and things like that.)

Based on its usage, I would take it as a shortening of something like:

Why, I never heard something so (outrageous|shocking|rude|etc) before in my life!"

I'm accustomed to the phrase as a response of indignation in the face of behavior that is seen as inappropriate to one degree or another.

Their first quotation of "Well, I never" is from 1836 but I found an earlier one from December 29, 1832 in a short story called "Quite Beyond Belief" by Mrs. George Crookshank published in The Maids, Wives, and Widows' Penny Magazine, and Gazette of Fashion (No. 10, Vol. I).

It's a good one as it's one of the protagonist "usual exclamations", used several times along with variations such as "Well, if ever!", "Well, did you ever?", "No, I never!", "Well it's quite beyond belief!". This suggests the phrase means "I never would believe such a thing!".

Here's the story in full (or click through to Google Books to zoom in): 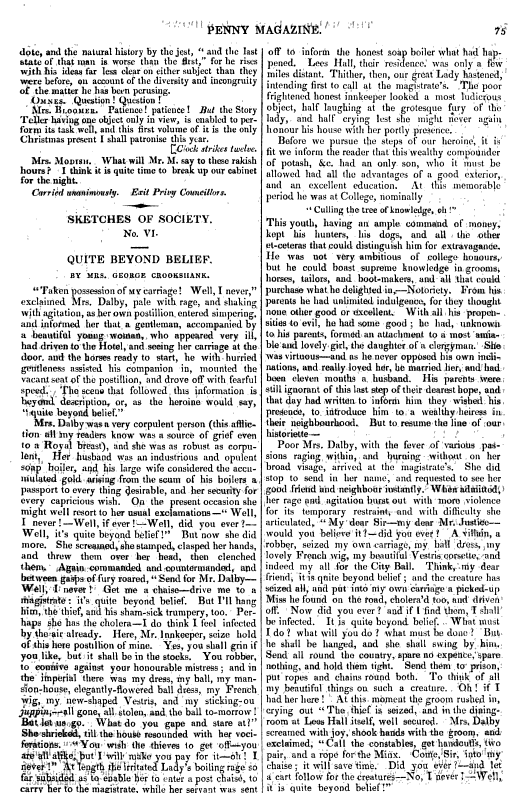 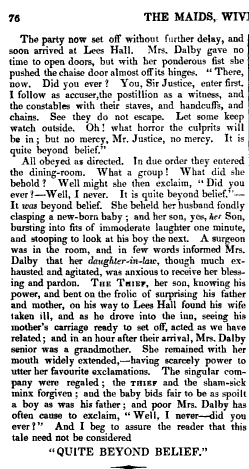 I was clouded by this very puzzle in my early teens, trying to cognise this very expression in Herge's "Tintin" comics -as uttered/spoken by the character, "Professor Curthbert Calculus".

But he went > "Well I never!". I suppose the former is just another form of "Why I never"?

Anyway my understanding was justified (back then) whenn I assumed it must've been a contraction of "Well I never 'would've!'" or "Well I never 'could!'/'could've!' or similar.

"Well I never" was used as a expression of surprise in the south west country of England when I grew up in the 1950's. I do not remember its use as indignation. Another similar one was "Well sop me bob" or similar - possibly a contraction of "well soft-soap me bob" which I never saw written down. Meaning disbelief. Probably related to "Bobs your uncle"