Difference between "Labyrinth" and "Maze"

I know the two are pretty much synonymous:

labyrinth
a complicated irregular network of passages or paths in which it is difficult to find one’s way; a maze

What are the differences between the two? Is a maze just a kind of labyrinth created as a puzzle? When should I use one and not the other? Any differences in connotations, formality, regional allegiance, etc?

There is a difference physically. A maze is a complex branching (multicursal) puzzle that includes choices of path and direction, may have multiple entrances and exits, and dead ends. A labyrinth is unicursal i.e. has only a single, non-branching path, which leads to the center then back out the same way, with only one entry/exit point. The labyrinth is easier. 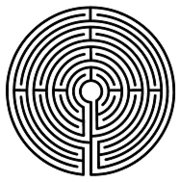 The word labyrinth carries a connotation of being impossible to get out of, unsolvable. This is because of its origin in Greek mythology; it was a complex maze constructed for King Minos in Crete by Daedalus to contain the Minotaur. If I remember it correctly, the Minotaur was an offspring of King Minos, who loved his 'son', even though he required some unsavory feeding practices (he ate people, specifically young Athenians). To prevent the Minotaur from ever finding his way out, or the Athenian sacrifices from escaping, he hired the best minds to design increasingly complex labyrinths, culminating in the last one built by Daedalus. The myth has two branches, one involving the escape from imprisonment of Daedalus and his son, Icarus, and the other, the death of the Minotaur at the hands of Theseus, who, at Minos' daughter's urging, used a clewe (ball) of string to act as a trail to find his way out after having killed the beast. (It's from this clewe that we derived our word, clue, something used to solve a puzzle.)

Mamet, like one of his characters, invents a labyrinthine, convoluted spiel leading nowhere, and like a magician distracts us with his words while elaborately not producing a rabbit from his hat. - Roget Ebert, re. American Buffalo

A maze, on the other hand, is just difficult, complex.

The city is beautiful in all its chipped, unvarnished glory, but their house is located amid a maze of narrow laneways.

Both words have vastly extensive entries in the OED. As is so often the case in English, where there are two words meaning much the same thing, the difference is largely in origin, e.g pig and pork, mutton and sheep etc. English being made up of multiple other tongues this is unsurprising. 'Maze', from the same root as 'amaze' is from Old English. Labyrinth has an altogether more classical etymology, being present in both Latin and Greek.

Nothing can compare to the Gardens of Versailles where the elaborate 39 fountains and paths, depicting Aesop's fables, are called, not surprisingly, a 'labyrinth'. Yet in modern English it is the word 'maze' which is used for elegant garden puzzles, such as at Hampton Court Palace. And the word 'labyrinth' tends to become used in criticism, negatively about something which should be straightforward but is infuriatingly complicated e.g 'the labyrinthine workings of government departments'.

Not the answer you're looking for? Browse other questions tagged differences nouns or ask your own question.