What is a "blue card" in this context?

I'm reading Salinger's "Ocean Full Of Bowling Balls" and came across the "blue card". I wonder what that means in that context. I found that "blue card" is currently used for immigrant agricultural workers, but couldn't be sure that they are related. It sounds more like it's related to sports somehow (baseball?) but I want to be sure. Any ideas?

Kenneth turned around to look at the man, and said:

That nearly killed the guy. He was bald as a pear. "A guy gave it to you on the road, eh?" he said. "Think he could fix me up?"

"Sure," Kenneth said. "You gotta give him a blue card, though. Last year’s. He won’t take this year’s."

That really killed the guy. "Gotta give him a blue card, eh?" he asked, shaking.

The fat man shook on as he turned back to his newspaper; and after that he looked over at our table frequently, as though he had pulled up a chair.

Full context can be found here.

Based on context (and Salinger's life), I'd guess it's referring some form of blue ration cards (perhaps like this one for cigarettes) - And the guy laughs because you can't redeem them anymore (e.g. they're now worthless). 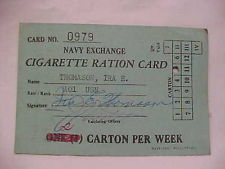 Look at the conversation they're having. Kenneth tells the guy someone "gave him" his hair. So clearly he's joking to begin with. Salinger makes this clear, he says it "kills" the guy, colloquial for "amuses greatly".

Then there's the extra goofiness of "last year's, not this year's." These guys sound like truckers to me. At the very least they're blue collar workers, used to the idea of "membership cards", licenses, union cards, id cards, clubs, etc. I think this is just a joke based on the guy's character, profession and culture.

Blue might mean "risque" here, with blue cards referring to trading cards with pin-up pictures on them. I don't know when the story was written, but Holden Caulfield, Kenneth's brother, was a teenager in the 1940s, and Vargas girl cards were popular in the 1940s and 50s. A "blue" deck of Vargas cards is described here, and some are pictured on eBay here.

I spent the last few hours digging for clues that may shed some light on the joke. I cannot say I've got a definite answer, but some findings in the Google Books archive gave me enough courage to propose an answer.

On page 97 of the Communist Infiltration of Maritime and Fisheries Unions: Hearings Pursuant to H.Res. 111 we see the following:

(Whereupon the membership card referred to was handed to Mr. Kersten.)

Mr. Brandhoven. San Francisco, I believe, yes it would be San...

Unfortunately I couldn't view the rest of the page (I would expect this document to be in public domain, strange).

In the story, the "guy" refers to Kenneth as "Red". Therefore, I think, the joke may be related to McCarthyism which was rising during that period. A guy giving you red hair on the road in return for a blue card, may refer to unsubstantiated accusations (disloyalty, subversion, or treason) made due to this political atmosphere.

Whether this sort of a joke suits Salinger's literary style is another story. Maybe it was the reason for him to stop the publication of an accepted story (long shot, I know)?

Not the answer you're looking for? Browse other questions tagged meaning-in-context literature or ask your own question.