Origin of the expression "landed in a tub of butter" (meaning lucky)?

I've heard a friend say "he says he was so lucky, it's like he sat his ass in a butter tub" a few times. Even though I'm from the same area (northeast USA) as the speaker, the expression wasn't familiar to me. I'm curious to learn more about its history, but can't find much.

I did find several examples in recent books:

Hollywood Monster: A Walk Down Elm Street with the Man of Your Dreams (2009): 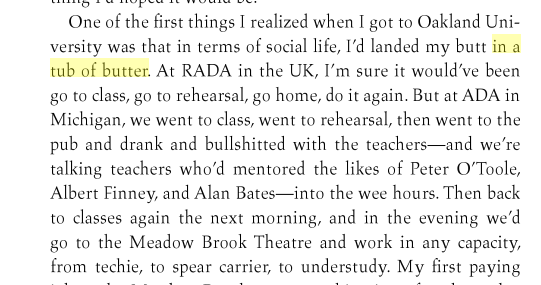 as well as blogs, (2009, someone writing about their 85-year-old grandmother's expressions):

“Well, he just landed in a butter tub!” – (referring to Reesie, the little puppy we found this summer)

and in a much earlier newspaper example in the Milwaukee Journal (1922, a humorous story about a lucky escape from the embarrassment of a wardrobe malfunction):

The expression, or at least the sat in version, seems to be well-known in the 1922 example (though the story includes a giant tub of butter, so perhaps the audience is supposed to understand it from context). But here my Google-fu fails me and I haven't found anything earlier. Where does the expression landed in a tub of butter come from?

I'm not sure if sat or landed is more common, if cursing or mentioning the posterior is required, or if tub of butter or butter tub is the more usual phrasing. So for bonus points*, which version is the most normal or idiomatic?

*Bonus points may be even sharper and more imaginary than regular points.

The earliest explanation of this saying that I've been able to turn up in a Google Books search is from Marillyn Taylor Klam, My Mama Always Said...: A Book of Southernisms (1993):

Many of Mama's country expressions featured some reference to butter. For instance, she always said: There's more ways to kill a cat than choking it to death in butter.

For a wealthy family, the expression was that they were rolling in butter. If a girl married a rich young man, it was said that she fell into a tub of butter.

This "rolling in butter" metaphor seems like a plausible source to me, since I've heard the expression "rolling in dough" used to describe possessing great wealth.

George: Come on Doolittle. Out you go. Hop it now. I ain't runnin' no charity bazaar.

Doolittle: (coming from the pub): Thanks for your hospitality, George. Send...

George: Yes, I know. Send the bill to Buckingham Palace. (He goes back into the pub.)

Mrs. Hopkins: You can buy your own drinks now, Alfie Doolittle. Fallen into a tub of butter, you have.

Doolittle: What tub of butter?

This exchange occurs after Alfie's daughter, according to Mrs. Hopkins, has "moved in with a swell"—namely, Henry Higgins. It leads into the song "With a Little Bit of Luck." No such expression occurs in G.B. Shaw's original Pygmalion (1916).

There are also two occurrences of the same idea of "tub of butter" as "lap of luxury" in Paul Hyde Bonner, The Art of Llewellyn Jones (1959, both snippets):

"She was Betty O'Connell, the daughter of Timothy O'Connell—they went to school together," Mrs. Kelleher explained. "Then her father died and she inherited millions and Middleham."

"Pete Boswell certainly fell into a tub of butter," the Admiral remarked.

"I can believe that. He left us a nice tub of butter to roll in. Sometimes—but not often, not really seriously—I wish he hadn't left us a dime."

A search of the Library of Congress's Chronicling America newspaper database turns up three instances of "falling into a tub of butter"—all by the same reporter writing for the same newspaper, all within 15 months of each other, and all in the context of baseball. From Wagner, "Home Runs Defeat Dan O'Neil's Club" in the Bridgeport [Connecticut] Evening Farmer (June 19, 1911):

From Wagner, "Senators in Bad Wreck at Steeplechase," in the Bridgeport [Connecticut] Evening Farmer (August 14, 1911):

That certainly was a collection of base hits that the Mechanics delivered at Steeplechase. They only beat Hartford by 26 to 5. The pitching [by Hartford] was so soft that it was like falling into a tub of butter for the Mechanics to gather the swats.

And from Wagner, "Umpire Red Held May Go to American Association; Other Notes of Interest Regarding Those In Sporting Spotlight," in the Bridgeport [Connecticut] Evening Farmer (September 24, 1912):

It will be as soft as falling into a tub of butter for some of the Red Sox players this season. Take utility man Krug for instance. He has played in only six games but will get a full share and this will probably amount to about $5,000.

Clearly Mr. Wagner views "soft as falling into a tub of butter" as a swell go-to simile; but whether he made up the expression himself or just repeated a saying then current in Bridgeport, Connecticut, is impossible to say on the basis of the skimpy evidence here. The fact that the phrase doesn't show up elsewhere in the same figurative sense, however, makes its status as a forebear of the modern phrase rather shaky, particularly since "soft" isn't the same as "lucky."

On the other hand, further searching in Google Books yields an even older instance in which falling into butter is a figurative treat. From Edward Eldridge, A California Girl (1902):

Some of the elderly ladies in Orangeville who had lived in the east many years before coming to California, brought to Orangeville some of their old sayings, and one of these sayings began to float through the atmosphere of Orangeville and was whispered from one to another; namely, that Julia Hammond had fallen into a tub of butter. Now, on first hearing such a statement one would think a sad calamity had happened to the young lady, especially when taking into consideration that in a few weeks' time she expected to change her name. But upon making an examination of her wearing apparel, one saw no sign of such an accident, and when she appeared at the table in her elegant morning wrapper you could not see any grease spots on her well-fitting garment, and when you began to wonder what they could mean by saying that Julia Hammond had fallen into a tub of butter, you resolve you will make a further and closer scrutiny of that young lady's person. And last it begins to dawn upon your mind, for you notice that when she puts her elbow on the table and her hand up to the side of her face, your eyes are almost dazzled by seeing something on her finger which are brilliant stones set in gold.

And from Guido Janes, "Marrying for Money," in Domestic Engineering (January 13, 1917):

"Well, you married for money after all," drolled out Ruff Cox.

"Yes I did. It was practically like falling into a tub of butter or getting an absolutely sure tip on the races. But at first my wife did not like to have her pies turned into engines of war. But the big check smoothed over her hurt feelings."

The 1902 and 1917 instances related to matrimony are directly on point and suggest that the phrase that the OP asks about has been in use in the figurative sense of "lucky" for more than a century.