How to refer on the property of a line which has a sudden change in its direction?

There is sudden (sharp, this means, it's not differentiable at that point) change in the gradient of a line: 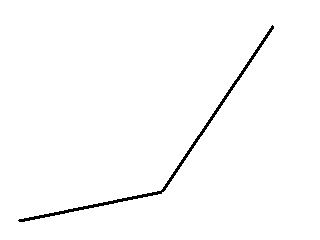 What is the proper way to refer to it, to not sound too mathematical. For example, "this line has a kink in it" seems odd. "The line has a break in it" might mean that there is a gap.

Edit: what I would like to finally express is how one adds this property to the line. E.g: "With this method, you can add a [noun] to the line", or "you can [verb] the line."

I don't need to emphasize the abruptness (but don't want it to be misunderstood as making a curve out of it). I would just like to make it clear, in simple terms, what would happen to the line.

the line changes in steepness.

You can add more detail too, if you need to describe the level of change.

the line severely changes in steepness.

the line slightly changes in steepness.

Following discussion and your edits, I would suggest.

With this method you can add an angle to the line.

Or, if you're happy to use multiple words, you will be much clearer saying:

With this method you can add a change of direction to the line.

noun 1 an oblique angle; a slant.
verb 1 [no object, with adverbial] suddenly change direction or position: the car had skewed across the track

OP's use case, with skew:

With this method, you can add a skew to the line.

Though I would suggest using a verb form instead:

With this method, you can make the line to skew (at a given point).

We normally use the word abrupt.

Sudden should be restricted to abruptness in the time dimension. Whereas, abrupt is applicable to any "sudden" change in any dimension.

However, it is risky to use acute when trying to describe a mathematical chart or phenomenon in lay terms, because there is confusion between its meanings mathematically (in geometry) and colloquially.

"Please be careful, there is an abrupt change in the speed limit from 70 mph to 35 mph at that stretch of the road. After which, there will be an abrupt bend." The instructor said suddenly.

We were surprised when we noticed the abrupt change in the curve. The rate of increase in pressure abruptly decreased with the increase in temperature.

a·brupt adj.
1. Unexpectedly sudden: an abrupt change in the weather.
2. Surprisingly curt; brusque: an abrupt answer made in anger.
3. Touching on one subject after another with sudden transitions: abrupt prose.
4. Steeply inclined. See Synonyms at steep1.
5. Botany Terminating suddenly rather than gradually; truncate: an abrupt leaf.

sud·den
adj.
1. Happening without warning; unforeseen: a sudden storm.
2. Characterized by hastiness; abrupt or rash: a sudden decision. See Synonyms at impetuous.
3. Characterized by rapidity; quick and swift.
Idiom:
all of a sudden
Very quickly and unexpectedly; suddenly.

a·cute
adj.
1. Having a sharp point or tip.
2. Keenly perceptive or discerning: "a raw, chilling and psychologically acute novel of human passions reduced to their deadliest essence" (Literary Guild Magazine). See Synonyms at sharp.
3. Reacting readily to stimuli or impressions; sensitive: His hearing was unusually acute.
4. Of great importance or consequence; crucial: an acute lack of research funds.
5. Extremely sharp or severe; intense: acute pain; acute relief.
6. Medicine
a. Having a rapid onset and following a short but severe course: acute disease.
b. Afflicted by a disease exhibiting a rapid onset followed by a short, severe course: acute patients.
7. Music High in pitch; shrill.
8. Geometry Having an acute angle: an acute triangle.

The line is angled or broken.

2
One word to say to someone who's being in a state they're usually not (or doing something they never did)?
3
Word for lack of comprehension of something easy to comprehend
5
Pending tasks and goals
1
Single word for "the act of passing possession and linear position to"
3
A word to describe an unexpected advancement in someone's learning progress
2
What is the word for 'slow change of direction'?
3
Word or phrase that means to solve a problem mainly via trial and error
2
Is there an adjective in English that describes something that didn't exist before but now it does and it makes you happy?
0
What do you call it when a system's own output is used for its input?