The meaning of "Mid or feed"

What does the expression "Mid or feed" mean? I realized it was a quote from Einstein.

In addition, what's the meaning of the "mid" and the "feed" in this semi-context?

After a Google search, I see the expression repeated in some online game ("League of Legends"; many related results). What about it, if anyone knows?

I'd love any piece of information, since I'm not a native English speaker, and I couldn't find a clear interpretation.

The Einstein macro is a fake. It is an example of comedic fake quotes such as "You can't trust everything you read on the internet" - Abraham Lincoln. This quote is purely about League of Legends (abbreviated to LoL).

Essentially the answer above me explains how 'Mid or Feed' applies to LoL.

People say mid or feed to bully their team into getting the lane than they prefer to play. Mid lane is usually the lane where people can become most powerful but other lanes need to be played as well.

Saying 'Mid or Feed' is frowned upon because as a team game LoL works best when on player doesn't bully his own team.

Ok, this is the explanation for League of Legends. I don't know what Einstein meant about that, though.

In League of Legends standard game (consists of 5 players per team; there are two teams), a player can choose one of the three lanes where he will go initially. They are the top, middle (mid) and bottom lanes. Therefore, the mid pertains to the middle lane, where there is usually one player going there. There are two players for the top and for the bottom.

Feeding means being killed by an enemy champion (or enemy player). You are feeding the enemy because he gets gold (money) from killing you.

"Mid or feed!" will always be an "option", but a very bad one. It basically ensures your teammates that you're an idiot and will most likely just feed anyways, no matter if you go mid or top or support... Besides, this basically destroys any possibility of teamwork right from the start, during champion selection, and the obvious consequence is a flat quantity of reports.

Succinctly, you're telling your team that you want to play the game in the most influential lane, or you will intentionally throw the game causing your team to lose.

Also, this originated in Defense of the Ancients (A WarCraft3 mod)...LoL players just think they are trendy enough to coin such a term.

Originally comes from this Dota comic. At least thats what started the popularity of the phrase that later blew up in League of Legends. 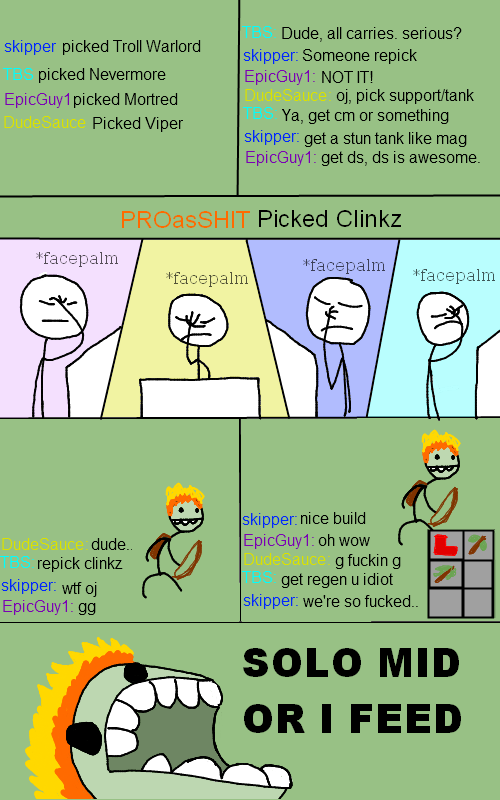 Not the answer you're looking for? Browse other questions tagged meaning phrases expressions meaning-in-context quotes or ask your own question.

7
Meaning, origin, and usage of “cor lummy”
6
In Edsger Dijkstra's quote, meaning of 'the plague'
0
Meaning of a quote from "The Quiet American"
4
Specific meaning of term "nail-biters" in context of mid-1970s America
0
Who or what was a "dissenting minister" in the 19th century?
1
Argle Bargle in mid-Fargle
0
Can all phrases that are considered idioms sometimes fall under the category of slang? Are they under the colloquial category because of everyday use?
0
What is the meaning of a shell of its former self?