What did Old English writing (letters and formatting) typically look like?

I am wondering if there is a specific kind of writing that people would typically associate with Old English language. Are there well-known manuscripts that typically represent the kind of writing (letters, formatting, etc.) that would be used at the time and in the regions where Old English spread?

As a related question, are there any specific typefaces that people would typically associate with the Old English language? Are there typefaces designed from Old English manuscripts, or that convey this distinctive look, if it exists?

I just spent some quality time perusing the Insular and Anglo-Saxon chapters of Michelle P. Brown's A Guide to Western Historical Scripts from Antiquity to 1600 (pp. 48-49 and 58-59), as well as pp. 34-42 of Marc Drogin's Medieval Calligraphy: Its History and Technique. The names they use for the scripts are varied and often conflicting, but they seem to agree on something like the following:

Saints Patrick and Augustine imported versions of Uncial and Roman Half-Uncial scripts into Ireland and Britain, respectively, in the early 5th and late 6th/early 7th centuries, again respectively. Those scripts evolved, cross-fertilized, and developed along the usual pattern of utility → formalization → decoration → exaggeration → need for a new utility script. The result was something probably best termed Insular Majuscule; think the Book of Kells or the Lindisfarne Gospels. This continued in use on both islands until the 9th century. Shortly after it appears, the utility version, Insular Minuscule also appears, and by the mid to late 9th century, entirely replaces the majuscule (uppercase) version. At that point, influences from the continent (read: Carolingian minuscule) would lead to a shift in writing styles for Latin documents, but Anglo-Saxon (aka Old English) continued to be written in Insular Minuscule until as late as the 12th century. Of course, Carolingian minuscule itself was developed at the court of Charlemagne under a certain abbot named Alcuin, born in — you guessed it — England.

There are well known manuscripts, such as The Anglo-Saxon Chronicle, which were written entirely in Old English. Also Beowulf, a few poems and so forth, but the Chronicle remains the longest piece of Old English writing we have. It was written by monks in calligraphic style. It was not written (and certainly not typeset) in the characters we come to think of as "Old English," although some of the letters might look similar.

An image from the Chronicle: 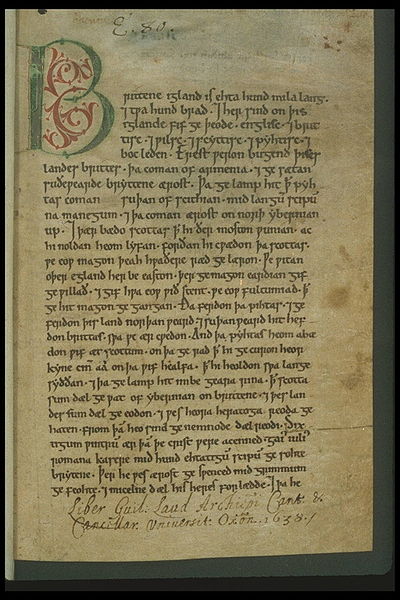 The writing system for Old English was pretty consistent across its history. Here are a couple of image links:

to manuscripts of Beowulf

to manuscripts of Bede's Historia Ecclesiastica

In general, the letter forms are not very different from Carolingian minuscule, but there is more frequent use of ligature digraphs, and, of course, there are letters like thorn and eth that don't appear in Latin.

In contrast to the accurate answers that the others have given, what would in popular culture be thought of as the writing for Old English (and of course it depends whether you mean "Old English" in a technical sense) would be some sort of black letter like these: http://www.fontspace.com/category/blackletter

Not the answer you're looking for? Browse other questions tagged writing writing-style old-english or ask your own question.

16
What do all capital letters typically refer to in writing?
28
How and in what way did the Danes come to influence English?
17
What did we gain in return for the loss of phonemic vowel length from Old English?
4
How common it is to emphasize a sentence by adding periods between words?
10
Pronoun in English without specific referent
7
Why did Old English use C while other Germanic languages used K?
5
How are double consonants pronounced in Old English (Ænȝlıſc/Eald Englisc/Anglo Saxon?)
2
Did Old English have /uw/?
5
When did all-caps formatting come to indicate shouting?
0
What punctuation did the original manuscript of Beowulf have?