Which is the correct form: "ten euro" or "ten euros"?

The situation is actually a mess. Here are only some of the relevant bits from Wikipedia:

Official practice for English-language EU legislation (not necessarily in national legislation) is to use the words euro and cent as both singular and plural. [...] Because the s-less plurals had become "enshrined" in EU legislation, the Commission decided to retain those plurals in English in legislation even while allowing regular plurals in other languages. The Directorate-General for Translation now recommends that the regular plurals, euros and cents, be used. The European Commission Directorate-General for Translation's English Style Guide (a handbook for authors and translators in the European Commission) previously recommended the use of regular plurals for documents intended for the general public but now has no restriction on usage[.]

As the euro was being adopted in Ireland the Department of Finance decided to use the word euro as both the singular and plural forms of the currency, and because Irish broadcasters took their cue from the Department[citation needed], the "legislative plurals" tend to also be used on the news and in much Irish advertising. This has had the effect of reinforcing the s-less plurals, although advertisements made in the UK for broadcast in Ireland tend to use the plurals euros and cents.

Common usage in the rest of the English-speaking world, where the euro is not the local currency, is to use the -s plurals. The media in the UK prefer euros and cents as the plural forms. Broadcasts of currency exchange rates outside of the European Union tend to use the plural in -s, with NPR in the United States and CBC in Canada being two examples.

So, both plural forms are correct. Just go with whichever your audience is more accustomed to.

In Community legislative acts the plural forms of euro and cent are spelled without the s, notwithstanding normal English usage.

Hmm However from the same document referred to:

In all EU legal texts, the nominative singular spelling must be 'euro' in all languages ('ευρώ' in Greek alphabet; 'евро' in Cyrillic alphabet). Plural forms and declensions are accepted as long as they do not change the 'eur-' root. 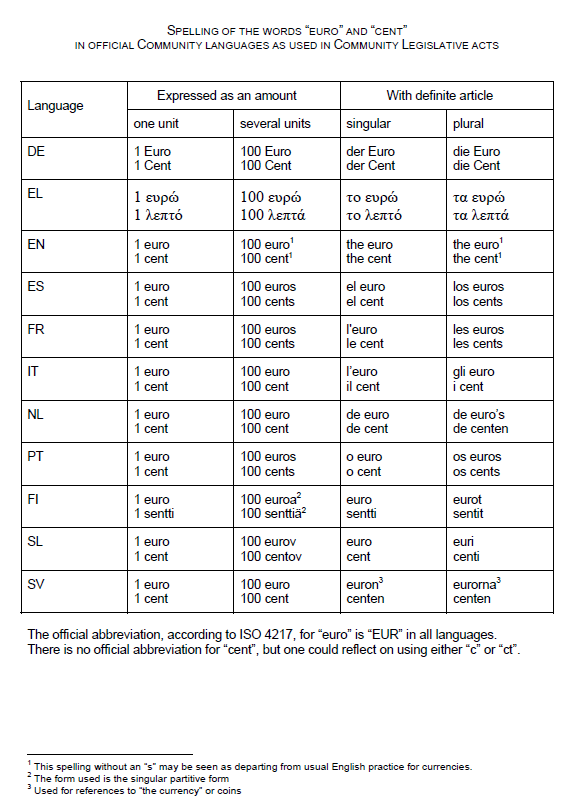 In this case, in English Euro (or euro) has two accepted plural forms: euros and euro.

In Community legislative acts the plural forms of euro and cent are spelled without the s, notwithstanding normal English usage. Otherwise, normal English plurals are recommended and used; with many local variations such as 'centime' in France. Wikipedia

It is clear that, in general, either is correct, but that particular institutions and organisations have their own rules. I am English, but live in Spain, so it seems natural for me to say

59
What is the correct plural form of LEGO: LEGO or Legos?
18
Are units in English singular or plural?
0
How do you say 100ths of the euro? cents/ centimes
2
Correct punctuation in numbers with mixed numbers and words like "2 thousand"