Origin of the greeting "Sweet dreams"

Does anybody know the etymology of the phrase "sweet dreams"? I tried googling but did not find anything satisfying.

Is this a relatively new phrase of the modern world or has this been in use for some time? I think it's the latter one.

The OED has the interjection as "a farewell to someone going to bed" from the 20th century:

But it goes back until at least the 19th and possibly 18th centuries.

John Wolcot, writing under the pseudonym of Peter Pindar, used it in his poem "Orson and Ellen; A Legendary Tale" published in 1801: 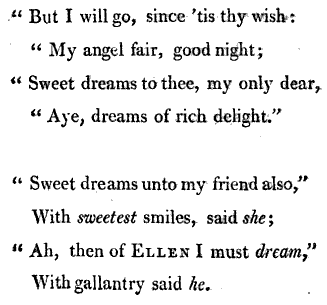 In the March 1776 of The Universal Magazine was published "The Serenade. A Pastoral Tale. From the German of Gesner", where the shepherd Daphnis watches over his beloved as she sleeps and sings: 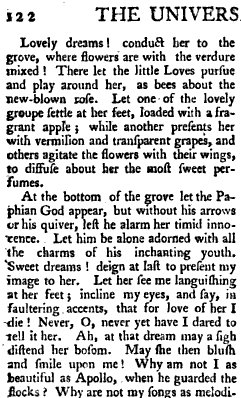 The same tale appears in 1776's as Idyl XI, "Daphnis" in New Idylles by Gessner translated by W. Hooper. Salomon Gessner was a Swiss painter and poet and first wrote "Daphnis" in 1754.

Dreams had been referred to as sweet much earlier, such as in Francis Bacon's Wisdom of the Ages in 1680 (originally from 1609 in Latin, "Done into English by Sir Arthur Gorges Kt."), and 1709 in The Works of Sir John Suckling: Containing His Poems, Letters and Plays.

The phrase may have gained currency during the 17th century.

GASPERO Your hearty wishes, mistress, And your sweet dreams come upon you."

Written around 900 B.C., Proverbs 3:24 says, "When thou liest down, thou shalt not be afraid: yea, thou shalt lie down, and thy sleep shall be sweet." Referring to a promise of the sweetness of sleep or dreams granted to those that followed God's commands.

I guess this phrase found it's use when people wanted the person they are wishing a "good night" to have nice (non-horrifying; as in, sweet) dreams and sleep in peace; I presume it just became colloquial in that manner. There isn't any significant history behind this phrase. Also, I've heard this being used since the time I was born! I think it has been in use for a long time.

I think the etymology is uncomplicated and fairly self-evident: just wishing someone pleasant dreams as a way of generally wishing that they have a good night's sleep.

According to the Google Ngram Viewer this phrase has been published in books since 1790, peaking in usage at the end of the 19th Century, and making a comeback since 1980.