What are the differences between "server", "workstation", and "desktop"?

From a book on Linux, I found the following text:

Could anyone explain these three words, please?

A server is a computer that is used to provide shared services to many people. In a business context, the server is usually kept in a room dedicated to this purpose (the server room). Servers are often dedicated to one purpose: a file-server provides shared file-storage services to a group of people. An email server provides email collection, transmission and storage services to a group of people. This does not mean that the information is shared (though it can be) but that the computer and the services it provides are concurrently used by tens, hundreds or thousands of people. Servers are typically housed in tower or rack-mount cases. Servers do not typically have a dedicated screen, keyboard or mouse attached - they are managed by other means or by using a KVM-switch to share one keyboard etc between large numbers of servers.

Apart from the above, computer hardware designed for server use in an enterprise is often distinguishable from desktop computers (including workstations) in some or all of the following ways:

There are home and SME "server" hardware devices which follow an almost opposite trend. They are designed to be very small quiet and unobtrusive and to sit on a desk or shelf. An example is the Excito Bubba, the size of a paperback book, sold without keyboard or mouse (it doesn't need one). These are also hardware designed specifically for a "server" rôle. There can be some overlap in form-factor with the "net-top" category of personal desktop computers.

Obviously, in general this term means "one who serves" and can be applied to waiters in restaurants for example. This term is also used for software, for example the Apache project's HTTPD software is invariably described as web-server software. Some people associate the term most strongly with software.

Oxford says "a computer or computer program which manages access to a centralized resource or service in a network." 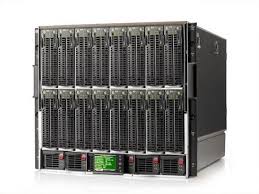 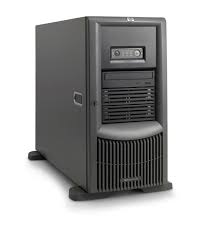 A desktop computer sits on the desk of one person and is primarily dedicated to the use of a single person. Whilst it might be shared consecutively (e.g. in "hot desking"), usually only one person is using it at any given time. It doesn't matter if the main part of the computer is placed under the desk. Desktops are often in tower cases (sometimes horizontally under a monitor) or all-in-one cases combined with the display. A desktop computer usually has a dedicated display, keyboard, mouse and other peripherals directly attached to it.

Other usage isn't especially relevant but the term can obviously mean the upper surface of a desk. It can therefore be applied as an adjective for objects designed to be placed on that surface.

Oxford says "the working surface of a desk. (also desktop computer)a computer suitable for use at an ordinary desk. the working area of a computer screen regarded as a representation of a notional desktop and containing icons representing items such as files." 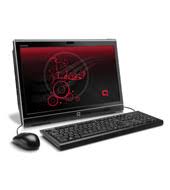 A workstation is a name usually reserved for a very high-performance desktop computer of the sort that might be used by scientists, engineers or on the trading floors of banks.

The word "workstation" has a more general use. In some cases it means a position equipped for a worker. Sometimes furniture makers describe use this word in the description of their products. Some people use the term workstation to mean any personal computer. Sometimes the word is used to define a computer used, by one person at a time, for a specialised task.

images linked from hp.com and are probably (c)HP

Here are some examples of current all-in-one desktop PCs:

As reported by the NOAD:

Not the answer you're looking for? Browse other questions tagged meaning nouns or ask your own question.