I'm currently composing a letter to a good friend of mine—using actual pen and paper—and I just realised, that I have absolutely no idea how to properly handle apostrophes in cursive script.

English, is in fact, a second language to me. My native tongue does not use apostrophes, at least not in a way I'm aware of. So I've never had to learn them properly.

There are two ways, as I see it, to handle this:

To better illustrate my question I've included an example of both options below, using the word "friend's". (I'd like to apologise beforehand for my terrible handwriting). 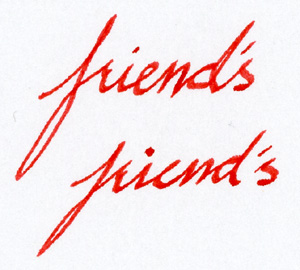 So, which way is the proper way to render this in English script?

Just as with the dotting of one’s i’s and j’s and the crossing of one’s t’s and x’s, one adds any diacritics or apostrophes only once the entire word has been written out in full. Otherwise it breaks the flow.

Thus in writing one’s in a cursive/script hand, one first writes out ones without the apostrophe, then goes back and adds it once the word is done. Do not lift your pen between the e and the s. Finish the word, then add its needed decorations to complete it.

In the example below, the dot below a position makes a point that you return to finish up only after that entire word has been written out in full.

Notice that the winner there is exit’s, which needs four fixes after the word is written before you’re done with it and can move on to write closed.

In cases with two t’s in the word, they are often crossed together with a single stroke, not merely when adjacent as in Scott, but sometimes when they’re a bit further apart, as in that. It just depends on how much “swash” in you have in your hand: how fast you’re writing and much flourish you’re using.

From this free page on writing in cursive, we have demos of all the letters, including the four that need fixing-up after they’re done.

I was taught to write the entire word and go back and add the apostrophe. One of the attributes of cursive is speed and my teaching supports the goal; however, beauty is another attribute and I think anyone would agree that your first example is nicer-looking than your second.

Not the answer you're looking for? Browse other questions tagged punctuation apostrophe handwriting or ask your own question.

3
Use of apostrophes
0
Using apostrophes
11
Are apostrophes actually needed?
18
Opposite word for “cursive”, as related to writing
3
What is the history of the cursive p?