What is the origin of 'bootleg'?

What is the origin of 'bootleg' ('bootlegger', 'bootlegging'), in the general sense of "illicit trade in liquor" (OED)?

The Online Etymology Dictionary gives one possible origin, from 1889:

As an adjective in reference to illegal liquor, 1889, American English slang, from the trick of concealing a flask of liquor down the leg of a high boot. Before that the bootleg was the place to secret knives and pistols.

Other possible origins include references to a tall beer glass, also known as a 'schuper':

Queer Drinking Vessels
The term "boot leg" applied to a very tall beer glass...may owe its origin to a misapprehension of the French touching on [an] old English drinking vessel. The black jack, a leather bottle sometimes lined with silver...According to a curious old book of the seventeenth century, when Frenchmen saw these vessels...they took back to France the story that the English drank out of their boots — N. Y. Sun.

References to 'schupers' as 'boot-legs' appear at least as early as 1886:

Clipping from The Critic (Washington, District of Columbia), 28 Jan 1886.

Also prior to 1889 are mentions of 'boot legs' as an ingredient in the making of, for example, "tangle-foot" whiskey and "boot-leg coffee".

The New Oxford American Dictionary has:

ORIGIN late 19th cent.: from the smugglers' practice of concealing bottles in their boots.

The commonly accepted legend, a legend of lengthy tenure, is that 'bootleg' used in the general sense of 'illicit trade in liquor' originated from the use of bootlegs as a place of concealment.

However, that origin legend has at least one serious competitor. The competitor, in addition, is as old as the previously known attestations for 'bootleg' in the specified sense, and so antedates the competing legend ascribing the origin to 'bootlegs used as a place of concealment'.

To illustrate the competing origin legends, I include the relevant citations. In OED Online, in an entry for "boot-leg | bootleg, n." not fully updated since its original publication in 1933, the sense and first attestation (known to OED) are given:

a 1889 Omaha Herald (Barrère & Leland), There is as much whisky consumed in Iowa now as there was before,..‘for medical purposes only’, and on the boot-leg plan.

The Online Etymology Dictionary elaborates, as quoted in the next paragraph, but does not differ substantially from the meaning and date provided by OED. Note, however, that while Etymonline explicitly ("from the trick") favors an explanation of the origin, OED, as cited above for 'bootleg', does not make any such claim.

As an adjective in reference to illegal liquor, 1889, American English slang, from the trick of concealing a flask of liquor down the leg of a high boot. Before that the bootleg was the place to secret knives and pistols.

The date given for the attributive sense of 'bootleg' is before (= a) 1889, and in OED the source is cited as the Omaha Herald, as quoted in Barrère & Leland. Barrère & Leland's A Dictionary of Slang, Jargon & Cant was published in 1889, but the quote from the Omaha Herald must be at least as old as the quoted article's reprint in the San Francisco Chronicle (San Francisco, California) of 28 Oct 1886 (behind paywall):

By using the wealth of primary source material now available (but not, presumably, available to OED at the time they developed the entry shown in the foregoing), I was able to find two 1886 uses, not of 'bootleg', but of 'bootlegger'. One of those uses, from The New North-West (Deer Lodge, Montana) 12 Mar 1886 (behind paywall), promotes the 'bootleg used as a place of concealment' origin legend:

The other 1886 use I found does not promote any origin, being merely a mention of jail sentences given to particular bootleggers in Kansas.

Now, the OED entry for "bootlegger, n." does promote the 'bootleg as a place of concealment' origin legend, but that legend is promoted as part of the sense of the word as used in and after 1889, rather than as the origin of the word:

One who carries liquor in his boot-legs; (hence) an illicit trader in liquor.

Barrère & Leland's entry in A Dictionary of Slang, Jargon & Cant, cited as the source of the Omaha Herald quote by OED, promotes an alternative origin of bootleg:

Boot-leg plan (American), by evasion or trickery, in reference to the saying that "the boot is on the other leg," i.e., not as one would naturally understand the assertion.

The explanation of the origin given by Barrère & Leland, that 'boot-leg plan' is "in reference to the saying that 'the boot is on the other leg'", has more chronological support than the competing origin legend.

The first use of 'bootleg' that I could find using contemporary primary source material databases is this from The Council Grove Republican (Council Grove, Kansas) 16 Nov 1844 (behind paywall): 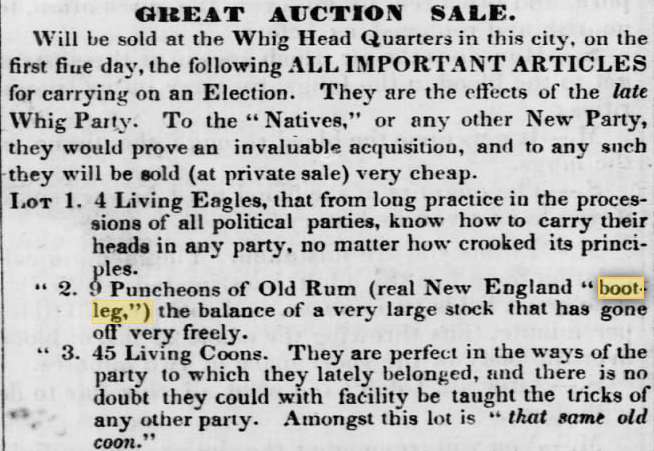 This use, in a tongue in cheek satirical article, as can be seen from the context, precedes the earliest use cited by historical and etymological dictionaries by 44 years. The appearance of 'bootleg' without explanation suggests the sense intended is known or can be derived by astute readers from the context.

In addition, the sense of the 1844 use, that is, generally, 'illicit trade in liquor', is not only at odds with 'boot-leg' in the sense of 'boot-leg coffee' and 'type of large beer stein', it antedates the earliest uses I could find of those, as follows.

For the latter, the 'beer stein' sense, the earliest use I could find is the 1886 use cited in the question. The former, 'boot-leg' in the sense of 'boot-leg flavored coffee', appears somewhat earlier, in 1868/1863:

From The Courier-Journal (Louisville, Kentucky), 10 May 1868, in a reprinted article dated 1863 about a visit to New York's City Prison.

To give you a little when and where that can't be found with a point and click, I searched for earliest print references of the smuggling sense of bootleg. Most mention Kansas, the first state to pass prohibition laws in 1880, but there is also this early reference from Iowa in the Pharmaceutical Record, Volume 9, 1889:

The permit system, without giving any protection to the druggist, is a continual source of annoyance and makes a cover for the bootlegger who sells the whisky, takes the money and lets the druggist shoulder the responsibility of censure for the drunkenness prevalent in the town where he lives.

The first Kansas reference is from the Biennial Report of the Attorney-General of Kansas, Volume 1, 1889:

MCPHERSON COUNTY.—The prohibitory law in our county is as well enforced as could reasonably be expected; in fact, there have been no open violations of the law for many years, that I can remember. The "bootlegger" now and then infests our county, but he is ordinarily short-lived [...]

And we get our first definition of the term from B. R. Porter, Probate Judge of Anderson County, Kansas, in The Economics of Prohibition, 1890, requoted from an 1889 report in The Voice:

Originally bootleg liquor, it came from smuggling a flask hidden between your boot and your leg

2
When searching for the origin of "bootlegger" has anyone considered foreign origin? Namely the low German/Saxon/Norwegian "utlegger"