Do you agree with these intermediate gradations between “frank” and “evasive”?

While consulting the version of the New Oxford American Dictionary provided with Mac OS, I came across the following “word spectrum”, which its says “show shades of meaning between two polar opposites”. While I generally appreciate its notes such as “The right word”, I was surprised by this spectrum: 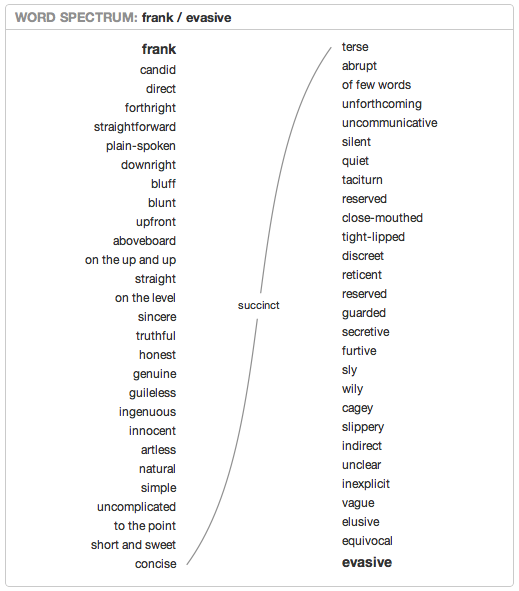 Some of the words in there appear next to one another, which I would truly treat as synonymous, like “honest” and “truthful”. However, I am surprised by the ordering of some other words. For example, I would have classified “upfront” even higher than “frank”. Also, I would classify words like “taciturn” and “of few words” as neutral on this scale, as I don't feel they convey any negative connotation.

So, my question is (and I'm sorry it took so long to get to it!): is this spectrum corroborated by usage in your experience? That may depend on local factors, of course, which I'd be happy to be referred to.

This is a difficult question to answer, mostly because there are so many words in the spectrum. Trying to draw out some key points:

So, with all of those qualifications (and there are a lot!) - I'd say that the classification is a reasonable guideline, in that each word listed can be used in a way that justifies its position on the scale, though many can also be used in ways that contradict it. But it would be good if it had been published with some of these caveats alongside it :-)

'Frank' is about content and form: if I am frank, I will not hesitate to tell you what I think, and I will say it in a straightforward manner. The majority of the words listed are about form only, content only, or verbosity only: one could be sincere in their content and flowery and verbose in their phrasing while still being of few utterances, which would probably mark them as taciturn.

So, a priori, this spectrum is incorrect, since it goes through at least three axes and is inconsistent about which are required.

Next, let's consider the spectrum as a spectrum reflected by human speech. There are 56 gradations listed. I'm not doubting that humans have a very nuanced view of honesty and forthrightness and verbosity. However, conveying these nuanced views consistently enough for any spectrum of 56 words to be meaningful strains credulity.

Were I forced to put those words into a spectrum, I don't doubt I'd come up with something similar, but those words simply do not fit in the same spectrum.

This is a constellation of words that, like star constellations, only looks like something recognizable when seen in two dimensions. In point of fact, terse, concise, innocent and many others in this list (sly? slippery?) are not directly on a path between frank and evasive.

This kind of exercise only shows that human beings see patterns where none exist because our minds are programmed to recognize patterns. I think the continuum would be clearer if it were edited down to fewer than a dozen words. A word cloud that gathers nebulous relationships together and delineates them explicitly does nothing to promote clarity.

6
What connotation do these words describing "someone who straightforwardly expresses their" opinion have?
2
Differences between "frank" and "honest"