Are collective nouns (and in particular companies) always given a plural verb form, or are certain ones treated as singular?

I'd say Microsoft have a way of bending the rules and I know that McLaren have won the championship. While this sounds strange, I believe it is correct English (sorry, I'm not native).

These company names are collective nouns. In general, in American English collective nouns almost always trigger singular verb agreement (after all, "Microsoft" is grammatically a singular noun, even if semantically it denotes an entity made up of many people). It is apparently much more common to use plural verb agreement in British English. It doesn't have anything to do with the size of the company.

British English treats collective nouns (corporations, departments, etc.) as plural. American English treats them as singular. The size of the group is irrelevant.

I'm English (brought up near Oxford) and usually use the plural. For example, I used to work with an organization called the Institute for Fiscal Studies, and I was accustomed to writing “the IFS are”, not “the IFS is”. Or, speaking of local politics: “Oxford City Council do not build enough council houses”, rather than “Oxford City Council does not build enough council houses”. I didn't consciously decide to use this syntax: it's just how I was brought up, so it is probably typical of British English, at least in my part of England.

I've just discovered an ambiguous formulation which I feel vindicates my habit. There was a recent legal case where Google forced the founder of a cheap-alcohol-search Web site to change its name from Groggle to Drinkle.

So the question is whether to write “Google have a lot of lawyers” or “Google has a lot of lawyers”. In my opinion, the latter is ambiguous, because “Google” in the singular could denote the search engine -- which, not being animate, doesn’t own lawyers or anything else. Using the plural eliminates the ambiguity.

I think it is most people's tendency to infer the people at the company as those doing the action described ("bending the rules") and therefore the plural sounds correct when that is the message you are trying to put across.

When it is the company as a single corporate entity, the singular works better ("Microsoft has bought Acme Widgets", "Acme has a great policy on renewable energy"). For this reason, I would say "Woody's has moved" as I presume the entire company, stock, and staff all went together.

You may find that some smaller companies deliberately use the plural when they want to emphasize the personal nature of things, real people doing/making stuff, or they will tend towards the singular when they want to sound bigger and more businesslike. "Acme recycles used paper" sounds like a corporate policy rather than the whim of one or more members of staff, even if there is only one person there.

It also leads to me to think about the corporate "we" - "At Microsoft, we write great software" is only true of a very small proportion of their staff who are actually developers/testers/project managers (arguably), and not of all staff such as sales and marketing etc. (I'm not getting into a debate about the proportion of MS software which is or is not great, save it for techcrunch).

A commercial company is not a (plural) collective noun. It is a (singular) legal entity. But it can be used as shorthand for a "group of people", and that is a plural collective noun.

So the company "Microsoft" is singular, but if you use the word "Microsoft" as shorthand for "the employees of Microsoft", that is plural.

Microsoft is a software company from the United States

However, when it comes to sports teams and musical bands, though they might technically be a single entity they are normally treated as plural, even when referring to the single entity. From Wikipedia, for example:

McFly are an English band formed in 2003.

It logically makes no sense to use "are" and "an" together like that: "are" is plural, "an" is singular. But language usage isn't always logical...

Answer shamelessly cobbled together from comments by alephzero and EdwinAshworth, as a definitive Br.E. answer was missing

First of all, the choice has nothing to do with the size of the company, on any measure.

Traditionally, companies are singular (they are, after all, a single entity separate from their members, employees, or directors), and take the pronoun 'it'. However, modern usage tends to include treating the name as a collective noun instead, and using the pronoun 'they'.

I usually treat company names as a collective noun, except when the company primarily exists solely as a legal entity, and not a trading entity that employees people (because there is no body of persons to describe, especially if it has only a single member).

One of the (possibly beneficial) aspects of being Australian is the "hybrid" Anglo-American usage that we seem to have adopted over a century or so. So you choose the right keyboard, but spelling and grammar checkers can be tricky, and need to be nuanced.

You still need to store words like neighbourhood, organise, honour, practise as a verb, and so on. We still use theatre, centre, labour, and many others, but things are slowly gravitating towards US English, I expect.

With company plurals, I would speculate (with no hard evidence) that they are used equally, so:

Either singular or plural would be used in equal measure in the media, and neither would be considered "more correct" than the other.

In terms of companies in general, I think size does matter a bit, but also (as noted above) whether the company name "sounds or feels" pluralish, and whether you're talking about the entity itself, or some elements within it.

I expect that the answer is so context dependent that it's hard to be overly definitive.

The main difference here is the implication that the individuals of the "class of '98" are "interesting", while the "British Army" is only a "superior fighting force" when taken as a whole. The spread of usage does seem to depend upon the particular variation of the language you use - American English seems to favour singular, while British English favours plural.

I would personally start by considering whether the reference is to the whole or the parts that make it up. This does leave some situations where the choice is unclear (eg: "Microsoft released their/its new software today"), though for those you can just decide how personal you want the tone to be.

The plural always look wrong to me. Would you ever say "Microsoft are a big company"?

Strictly in all English-speaking countries, all commercial companies, charitable bodies, public authorities and any other kind of corporation corporation are “corporate individuals” (despite my tautology). That makes them strictly singular in the same way you and I are singular… but strictly is not idiomatically.

Sometimes it’s either or both, as when it’s equally valid to think that “Manchester United has/have won the cup for a fourth time…” because on the one hand the team won and on the other, the members selected to play that day won.

There may be the odd idiomatic difference between American and British or any other country’s form of English and most obviously (last time I looked) many American schools did and most British schools did not teach topics like “container for the thing contained” much less its corollary, “thing contained for the container”.

Singular or plural, can we really “boil a kettle”? In a boundary we might; otherwise, clearly not.

Again, when we open one can and a number of worms crawl out, is the description singular or plural?

Equally, since that’s a different kettle of fish, does “that” refer to a single kettle or a school of fish - and even then, is that a singular school or a number of individual fish?

Legally, teams or corporations or governments are all, always, singular.

Idiomatically, context over-rides any such rule.

According to the Ngrams 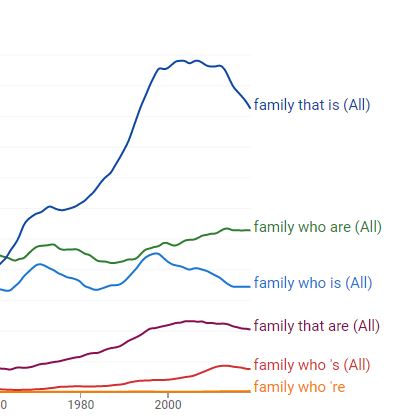 A corporate entity is a singular proper noun, so the above sentence ought to read "Microsoft has a way of bending the rules". If it helps, replace the proper noun with the definite article, e.g. "the company" in this case, and rephrase to suit.

In these cases the plural form would be correct.

Not the answer you're looking for? Browse other questions tagged grammaticality grammatical-number verb-agreement collective-nouns or ask your own question.