Origin of the word “Jellyfish”

Does anyone know the history of the word jellyfish and how it was defined and popularized?

OED lists a usage in 1707, but that is referring to a gelatinous vertebrate fish.

They start showing uses as we know it today (albeit hyphenated) around 1841.

The reason for asking is that from a scientific perspective, it is a poorly-defined, non-taxonomic category. Some animals clearly should be called jellyfish, but lots of other things (siphonophores, comb jellies, even salps) are lumped in there where they may not belong.

Related, Latin languages use medusa (or similar) for English "jellyfish". What are some other common names in other languages?

This is what the online etymological dictionary has to say on the subject (not much as it happens):

I would guess that the name comes from the simple fact that jellyfish look like they're made of jelly. If you've ever held one in your hand you will agree that the similarity is striking. I doubt you will find any clearer etymology than that.

As for why it is used as a popular name for a variety of marine animals, the answer is simple ignorance. Common animal names do not stem from any taxonomical knowledge, they come from what ordinary people (people who are not professional taxonomists) see. That's why you have things like the killer whale, Orcinus orca, which is actually a dolphin or the "toothed whales" which include the sperm whale, Physeter macrocephalus, but are not true whales (Mysticeti). For an even clearer case, think of the sea horse which is quite clearly not a horse of any kind yet the reasons for calling it so are obvious the second you lay eyes on one: 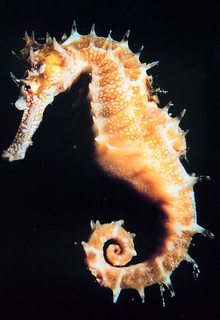 As for medusa, it is actually Greek, not Latin and can be traced back to the mythical beast. Apparently, Linnæus (the father of modern taxonomy) named the genus because of their long tentacles. Asking for synonyms in other languages is off topic here but I can confirm that the jellyfish is called a medusa or similar in most Latin languages (including French, Spanish, Catalan and Italian) and in modern Greek.

Not the answer you're looking for? Browse other questions tagged etymology nouns or ask your own question.