Did the CIA really introduce 'conspiracy theory' into popular usage after JFK?

I heard that after the JFK assassination the CIA, through assets in mass media, introduced the term 'conspiracy theory', with it connotations of something clearly ridiculous, and only believed by maniacs, into common use. Before this it was used, but was a rare phrase, and had no idiomatic baggage.

If this is true, it's a really interesting conspiracy theory!

However, I can't find any hard evidence one way or the other...

I won’t consider the likelihood of the CIA choosing this particular method to influence public opinion or whether they actually owned or could influence enough media to produce such a shift in the English language. Those would be important questions to actually assess the theory.

Instead, I’ll answer the language questions: Did use of “conspiracy theory” increase and did its connotative meaning shift from neutral to negative?

My go-to tool for historical usage questions, Google Ngram viewer, shows that usage of “conspiracy theory" increased after the assassination. But it was increasing since the early 40s — before the CIA was even founded.

But did its connotation change? I looked at 10 books published before 1961 and 10 published after, in both cases taking the first 10 that come up in a Google Books search. In books following 1961, I found six negative and two neutral mentions (in two, there was no preview). In books before 1961, there were three negative and five neutral. The books were not randomly selected, but it does show people used it negatively before 1964.

We can also examine the quotation from Barrie England’s answer in greater depth: “The claim that Atchison was the originator of the repeal may be termed a recrudescence of the conspiracy theory first asserted by Colonel John A. Parker of Virginia in 1880.” The use of recrudescence in medicine to indicate the return of a disease in medicine and its derivation from a Latin word for “to become raw again” mean that this passage isn't complimenting Colonel Parker by calling his idea a “conspiracy theory.”

OED’s second definition comes before 1964 and is also negative. It comes from Karl Popper, writing about the “conspiracy theory” of history, which he associates with people deluded into thinking they can make “heaven on earth” and need to counter (imagined) conspiracies with their own.

So the term “conspiracy theory” did become more popular after the assassination, although its popularity had been growing already. But its negative connotation has been there from the start.

The OED’s earliest citation is this from the ‘American Historical Review’ in 1909:

The claim that Atchison was the originator of the repeal may be termed a recrudescence of the conspiracy theory first asserted by Colonel John A. Parker of Virginia in 1880.

SUPPLEMENTAL TO A. Brooks' ANSWER: The phrase 'conspiracy theory' was current in legal and historical discourse well before the 1940s, but usually with reference to a particular legal point or historical question. The 'conspiracy theory' of strikes, for instance, was the legal theory that labor unions constituted a 'conspiracy in restraint of trade'; the 'conspiracy theory' referred to in Barrie England's quotation from the OED is the theory that the Kansas-Nebraska Act, which effectively nullified the Missouri Compromise, was engineered by a cabal of Missouri politicians to destroy the political influence of Senator Thomas Hart Benton. Charles Beard's claim that the 14th Amendment had been 'rigged' to grant unprecedented rights to corporations came to be known in the history biz as "The Conspiracy Theory of the 14th Amendment.

I think it's pretty clear from A. Brooks' NGram that Popper's The Open Society and Its Enemies (1945), which was very widely read in my generation, kicked off discussion of the "conspiracy theory of society". But Popper was writing about historiographers; the widespread notion that conspiracy theories are particularly characteristic of unlettered radicals seems to have been largely the work of historian Richard Hofstadter in The Age of Reform, a 1955 study of Populism, and "The Paranoid Style in American Politics" (1964). Hofstadter scarcely needed CIA support.

It appears officially (in GB) at least in 1887, Hansard's Parliementary debates with the same sense and political connotations of the CIA usage.

Interestingly, it was a phrase used by the Unions accusing the Judges of paranoïa agaisnt their supposed motives. 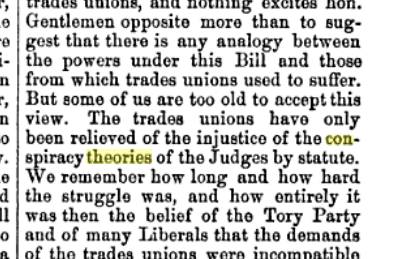 There is no doubt of C.I.A involvement the spreading of what is now recognized as the most successful all purpose ad homenim logical fallacies technique
to foil any dissent to official state narrative through what i can imagine were,are operation mockingbird and CFR members. “The CIA owns everyone of any significance in the major media.” – William Colby, former CIA director

“We’ll know our disinformation program is complete when everything the American public believes is false.” – William Casey, CIA Director (from first staff meeting, 1981)

“Deception is a state of mind and the mind of the State.” – James Angleton, head of CIA counter intelligence from 1954-1974

Not the answer you're looking for? Browse other questions tagged meaning etymology expressions history usage or ask your own question.