What does “loose change” mean and what is its origin?

What does loose change mean?
What is the origin of the phrase?

Loose change refers to small amount of coins. Change refers to the money you get back when you do not pay exactly the right amount--for example, if you pay for a $0.90 item with a $1 bill, you would get back 10 cents in change. The modifier loose is added to the word because small amounts of coins tend to not be put into a wallet, but just put into your pocket and allowed to be loose.

To take a stab at the origin part of your question, I searched for the earliest use of the phrase and found this example from a letter to the editor of The Gentleman's Magazine, 1803:

People of fashion, in particular, have a set of new words, very shining and polished in appearance, which obtain among them a large circulation, however unshapely and uncouth they may seem in the eyes of collectors, and although they are refused in all legal tenders. They are admirably adapted, however, for the traffick of certain great houses in Pall Mall and St. James's street, and from their being very widely circulated, in loose change, by certain female Bankers and lettered Countesses, they are, in compliance with a very customary pronunciation, known by the name of BRIM-igams.

The phrase was in italics in the original and was part of the letter writer's fascinating peeve using an extended metaphor of banking and minting to ask the question, "who has the right to coin new words and phrases?" (recommended reading for EL&U users). Interestingly, I think the writer intended the double meaning of loose in this phrase to describe both rattling coins and the moral standards of "certain females."

Here's a clip of the actual text: 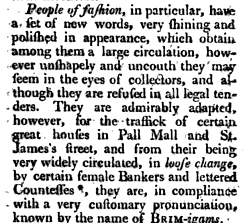 Coins. You probably got them as change when you paid for something in a shop.

It's the coins loose in your pocket, usually as a result of the change returned after payment in cash. I'm not sure what is the earliest known recording of the phrase, but I think it's a 20th century expression.

The word “change” is derived from “exchange”, French I think, because it’s the money you get back in exchange for what you pay someone, for example. Earliest use is 1620, apparently

Not the answer you're looking for? Browse other questions tagged meaning phrases etymology or ask your own question.