What exactly is “I'mma?”

I am not sure how it's written, I have never gotten a precise answer when I've asked.

Where does it come from, and what does it mean?

In 2010, linguist Neal Whitman wrote it's the Prime Time for "Imma" commenting on its use in pop lyrics.

In fact, this Imma (also spelled I'ma, I'mma, Ima, and I'm a) is not the contraction I'm followed by a, but a contraction of I'm gonna — which, of course, is a contraction of I'm going to, which is itself a contraction of I am going to. The progression from I'm gonna to Imma involves two common phonetic processes. The first one is the simplification of the consonant cluster mg to just m, resulting in a form that you might spell Imana. If you listen carefully, you can hear people say Imana all the time, although if called upon to write down what they said, you'd probably just write it as "I'm gonna" (or "I'm going to," depending on your acceptance of gonna). From Imana, it's a short step to Imna, as the unstressed middle vowel drops out. This process is called syncope, and also happens in words like choc'late, veg'table, and int'resting. I caught myself saying Imna just the other morning, when I told my son, "Imna get some more napkins." In the final step, cluster simplification occurs once again, reducing Imna to Imma.

Of the origin, he says:

Here's what I think happened: Imma existed in the spoken language for years before making it into written form. The Oxford English Dictionary doesn't have a listing for it yet, but the sociolinguist William Labov made note of I'ma in a 1967 study of African American English. The usage hasn't been restricted to one particular dialect, though; my son heard it in a 1960s-era "Tom and Jerry" cartoon a few days ago, when an Old West sheriff said, "Imma get the fastest gun in the west!"

When Imma did start appearing in print, it appeared in the lyrics of rap songs. The earliest such example I have (thanks to my brother Glen) is "F--- tha Police" by N.W.A., from 1988: "I'ma kick your ass." There's also House of Pain's "I'm a Swing It" from 1994, with the line "Ya dis me and I'm a dis ya back / I'm a swing it." Imma continued to be used in more and more songs, though not in hit singles. Even so, as Imma continued to appear in songs, it was just a matter of time before some of those songs started appearing at the top of the charts, which they eventually did in the early 2000s. The use of Imma and its variants in space-constrained contexts like text messages and tweets may have contributed as well, but it's hard to say to what extent.

It sounds to me like the AAVE dialect's first person future immediate. This generally starts off "I'm a-", and is meant to indicate an imminent action. To put it off a bit further in the future, a "gonna" can be appened ("I'm a-gonna..."), and to put it even further off, the "a-" is then removed ("I gonna"). 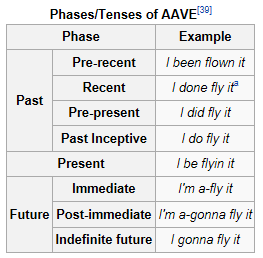 scraped from the linked wiki page

More typical "prestige" dialects of English only have a single future tense, which is roughly equivalent to the AAVE "I gonna" (but without the "gonna").

AAVE is a dialect spoken in most urban areas of the USA, and is the dialect used for many (if not most) forms of American popular music as well. While it is decidedly (and sometimes proudly) not a prestige dialect of English, it is incredibly influential. So bits of it often seep into conversational English. Particuarly so when they are useful bits (the extra tenses and aspects in AAVE are damn useful. I tend to use the aspects myself in casual conversation, even if my audience isn't always familiar with the dialect.)

As for whether you should learn AAVE, that's a tough one. It would help a lot in understanding American Blues, Rap, and Hip-hop lyrics. On the other hand, formal training in it is going to be very hard to come by (again, not being a prestige dialect). I learned what little I know by immersion, and I'm not sure there really is any other good way.

I'mma is a slang contraction of I'm gonna. It's common in some dialects; others use it only in an affected manner similar to lolspeak. It's good to know what it means, but I would only recommend adopting it yourself if you're quite comfortable with using slang and know when it's appropriate.

If you're comfortable speaking in slang, then do it if you'd like. It isn't a necessity; it's good to know what it means, though. I hate typing in text language (typing lyk dis), so I rarely use such slang.

Not the answer you're looking for? Browse other questions tagged slang abbreviations or ask your own question.

37
What is an appropriate response to “what's up” greeting?
7
What is the definition and origin of “imba”?
9
Is “sb.” a commonly accepted abbreviation? What does it mean?
9
What does it mean to “pay X on the dollar”?
2
What is the meaning of the word “this,” all by itself?
28
Why does “big cheese” mean someone important?
4
What is swag? And where does it come from?
4
What does “what for” mean and where did it come from?"
2
Orwell: “A glimmer [is] one who watches vacant motor-cars.” What does this mean?