The dark dot in your eye

I think every single one of us has experienced a dark dot in his/her sight when looking at a white surface such as a white ceiling, there's something in our eye that with a little focus we can see it, and when we move our eyes around, that thing floats around quickly in your sight. It's like a substance on eye's surface, I want to know what is it called. Hope I'm clear enough.

You're probably thinking of floaters.

Floaters are suspended in the vitreous humour, the thick fluid or gel that fills the eye. Thus, they follow the rapid motions of the eye, while drifting slowly within the fluid. When they are first noticed, the natural reaction is to attempt to look directly at them. However, attempting to shift one's gaze toward them can be difficult since floaters follow the motion of the eye, remaining to the side of the direction of gaze. Floaters are, in fact, visible only because they do not remain perfectly fixed within the eye.

Floaters are deposits of various size, shape, consistency, refractive index, and motility within the eye’s vitreous humour, which is normally transparent. At a young age, the vitreous is transparent, but as one ages, imperfections gradually develop. The common type of floater, which is present in most people’s eyes, is due to degenerative changes of the vitreous humour. The perception of floaters is known as myodesopsia, or less commonly as myodaeopsia, myiodeopsia, myiodesopsia. They are also called Muscae volitantes (Latin: "flying flies"), or mouches volantes (from the French). Floaters are visible because of the shadows they cast on the retina or refraction of the light that passes through them, and can appear alone or together with several others in one’s visual field. They may appear as spots, threads, or fragments of cobwebs, which float slowly before the observer’s eyes. Since these objects exist within the eye itself, they are not optical illusions but are entoptic phenomena.

The overarching term for all these shadows in the eyes is entoptic phenomena. As the term implies the source of these visual effects is the eye itself - floaters (including the blood corpuscles), Haidinger's brush, branching patterns, and the flying gnats for instance. As these are real images cast upon the retina, they are not optical illusions.

Under suitable conditions light falling on the eye may render visible certain objects within the eye itself. These perceptions are called entoptical... it is only under special circumstances ... that these shadows become visible.

Depending on what you may have looked at previously, especially a light source, it may also be the effect of afterimage also known as ghost image or image burn-in

An afterimage or ghost image or image burn-in is an optical illusion that refers to an image continuing to appear in one's vision after the exposure to the original image has ceased. One of the most common afterimages is the bright glow that seems to float before one's eyes after looking into a light source for a few seconds. Wikipedia

...although, I do believe what you are describing is floaters

Another term is squiggly line

Oh, squiggly line in my eye fluid,
I see you there lurking on the periphery of my vision,
But when I try to look at you, you scurry away.
Are you shy, squiggly line?
Why only when I ignore you do you return to the center of my eye?
Oh, squiggly line, it's all right.
You are forgiven. 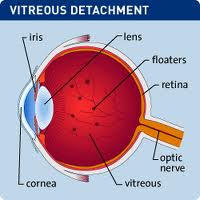 You may be referring to the "fovea"; the dark spot on the retina that is the attachment site of the optic nerve.

5
Is there a word for those random spots/patterns you see when you enter your home after playing outside on a sunny day?

5
What is the aural equivalent of eye-witness?
6
A word describing the substance in the human eye
4
Word for "dark" with positive connotation
22
Word for "Can't be seen with the naked eye"?
6
What's the usual name for a 'dot' billboard?
2
One word that describes a person who has an eye for detail
0
"Tall, Dark, and Handsome" Character Archetype?
3
Is there a word for the feeling that something is “off” about an overly pleasant group activity?