Is it "alright" or "allright"?

In practice I find both spellings being used. From a logical point of view, "allright" (as in: "all's right — everything is fine") seems correct. However, I recall hearing that "alright" is the preferable variant.

Is there consensus over which to use? Do they possibly even mean something different?

The one-word spelling alright appeared some 75 years after all right itself had reappeared from a 400-year-long absence. Since the early 20th century some critics have insisted alright is wrong, but it has its defenders and its users. It is less frequent than all right but remains in common use especially in journalistic and business publications. It is quite common in fictional dialogue, and is used occasionally in other writing <the first two years of medical school were alright — Gertrude Stein>.

The stats from the Corpus of Contemporary American English and the British National Corpus look as follows:

This suggests that alright is much more popular in Britain than in the US. However, the Corpus of Historical American English paints the following picture: 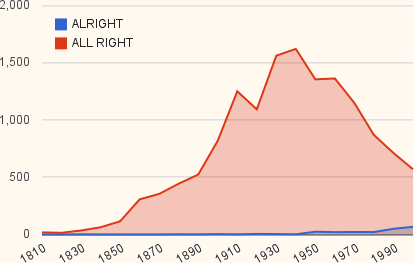 So, alright seems to be gaining popularity in the States as well.

Lastly, the fact that all right loses one L when written as one word is not peculiar in the least — just think of already, almost, although, albeit, almighty, altogether, and any number of other words formed this way.

The second spelling requires a space: it is either “alright” or “all right”.

Usage: The merging of all and right to form the one-word spelling alright is first recorded toward the end of the 19th century (unlike other similar merged spellings such as altogether and already, which date from much earlier). There is no logical reason for insisting that all right be two words when other single-word forms such as altogether have long been accepted. Nevertheless, although found widely, alright remains nonstandard.

I was taught that "alright" was never correct. I don't see any problem with it in informal contexts, but I would avoid it elsewhere.

I'm my humble and uninformed opinion they are both correct, but are a little different.

I would use "alright" in a sentence such as: "Alright, I finished fixing the engine, now to test it.", or "alright, alright already, I'll fix the brakes." while I would say "The car's running all right, but it really needs a wash."

So, I would use "all right" when it really means all of it's right, while "alright" is used in more informal or derivative uses where it doesn't really mean all is right.

According to Collins Dictionary and Thesaurus (UK, 2nd ed. 2000):

alright is "a variant spelling of all right."
"USAGE NOTE The form alright, though very common, is still considered by many people to be wrong or less acceptable"

The entry for all right includes:
"all-right (US slang) acceptable; reliable."

allright doesn't even merit an entry.

So 'alright' is all right, but 'allright' is wrong, at least in my book.

To my (overly pedantic) mind, "all right" is the only correct spelling. The other abominations arose from the colloquial "alrighty," as an analog to "already," I suspect.

"All right" is the correct phrase according to almost all grammarians and as per correct usage.

The British Shorter Oxford Dictionary as of 1992 lists alright as

The Australian Macquarie Dictionary as of 1991 simply has

Personally I always use alright even though I'm aware some pedants might not approve.

In my view, "all right", as a phrase, means "OK", "nominal", or "acceptable", as in "The fix was all right, but clearly not intended as a long-term solution." The claim that "all right" somehow implies "correct in every way" is belied by the fact that while it juxtaposes the two words, it doesn't form an integral phrase. This is emphatically conveyed by the expression "just all right", which would be quite a stretch to interpret as "merely correct in every way." For these and other reasons, I view "alright" as a lazy variant that has muscled its way into English, but I don't see how it adds anything useful or esthetic.

At Grammar School, in Britain, circa 1955, we were taught that the correct spelling was alright.

I have no objection to anyone spelling it all right, but for me alright it shall remain until my dying day.

Not the answer you're looking for? Browse other questions tagged meaning differences orthography spacing doubled-consonants or ask your own question.

2
"All right" vs. "alright"
1
All Right vs Alright when starting to speak
2
Why don’t other pronouns get to albe-themselves, à la albeit’s “it”?
5
Is "blah blah blah" the most common spelling?
9
Why are some words combined into a single word while others stay as two words?
1
'Alright' or 'All right' in a quote (tattoo)
2
Which words may start with "al-"?

20
What was going on with "quha", "quhat" and the like in Scots and English?
5
Word/term meaning "conversion from one dialect to another"?
3
Hearing vs listening to someone
4
GRE practice question: Using evidence
7
Any advice for agentive suffixes of single-syllable words ending in y?
2
The use of "en-" vs "em-" as a verb prefix
7
What does the phrase "or euer" mean in Middle English from the 1500s?