Are curly braces ever used in normal text? If not, why were they created?

Are they actually used in normal text? I mean something like a 'normal' book (not a manual, or a technical document). I don't think I've ever seen them yet they clearly predate programming which is the context in which I tend to use them.

Wikipedia only mentions technical uses (such as music and mathematics) or

In mathematics they delimit sets, and in writing, they may be used similarly, "Select your animal {goat, sheep, cow, horse} and follow me".

However, that example is not something I would expect to find in a novel for instance.

So, are curly braces {} ever used in normal text and, if so, when and how? If not, why are they standard? Did they become so only with the advent of computers and programming? A brief history would also be appreciated (when were they introduced to the language for instance).

They're occasionally used in 'normal' writing when other brackets and braces have already been used for another purpose; and to unite two or more things together.

For example, this 2011 edition of The Chemical History of a Candle by Michael Faraday has in a "Note on the Published Text":

Crookes, as editor, inculated into the text of Faraday's words short descriptions of the lecture demonstrations and placed these in square brackets. ... Because Crookes's use of square brackets, minor typographical errors are here indicated in curly brackets {}.

The curly bracket is also called a brace. Here's the OED entry, which also has some illuminating quotations:

14. A sign } used in writing or printing, chiefly for the purpose of uniting together two or more lines, words, staves of music, etc. Sometimes, but less correctly, used in plural to denote square brackets [ ].

This shows the connection between a brace and a pair; however, a single, often large, brace is also used to unite several things. Here's an example from TeX.SE: 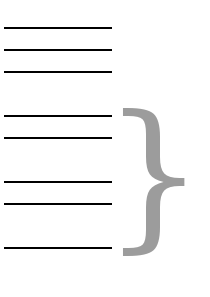 Here's a 19th century example from The London encyclopaedia (1839): 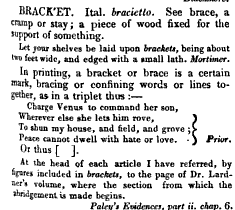 Here's a 17th century definition in An Universal Etymological English Dictionary (1675). Note they include an example in the definition, I've taken a larger screenshot to show how it in real use in the left column (and common throughout the book), to join two words to a single definition: 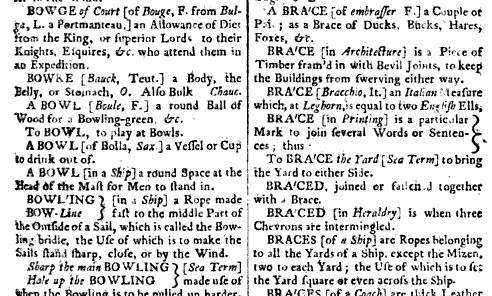 Finally, here's the OED's first quotation for brace, Thomas Blount's entry for brace in Glossographia (1656) (you can see on other pages Blount uses the brace to combine two words in a single entry): 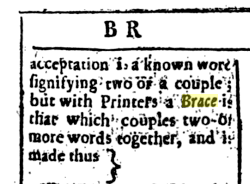 Braces, or curly brackets, are in a list of miscellaneous symbols that R L Trask includes in his ‘Guide to Punctuation’. He writes that they

. . . have various particular uses in specialist disciplines, and sometimes in dictionaries, but they have no function in ordinary writing.

I have nothing on the history, I'm afraid. You might find something in the book reviewed here.

They could be used where parentheses and brackets have already been used, eg,

which is the reverse of their use in chemistry:

I'm not sure you'd get away with using them like this in formal writing (outside of chemistry), but that's more because it's a stupid way of presenting information that would be better rephrased. If an urgent and unavoidable need arose, however, I'm sure you could argue a case for their use in this way.

I imagine that curly braces could be used this way as well? Otherwise I agree with the above.

When I edit a web page on Wikipedia, in the Edit summary (Briefly describe the changes you have made) I include all of the edited text (if it is short) or part of it (if it is long), plus a brief explanation, where needed, which I attach at the end enclosed in curly brackets to make clear that my explanation does not constitute part of the edited text.

Not the answer you're looking for? Browse other questions tagged punctuation history or ask your own question.

5
“John Doe”, “Jane Doe” - Why are they used many times?
4
Why are I and O always capitalized, but a is not?
10
Where and why were capital letters first used in headlines?
1
commas in “They are sweet, not sour, grapes”
36
Why are Leicester & co pronounced as they are?
1
Why were square brackets used to contain these words?
4
Why is “handsome” usually used for men, not women?
3
Are the “paraphrase brackets” (*not* square brackets) used in English?
5
Was the use of accents in -ed adjectives ever common-place? When were they first used in modern books?
2
Why are some of the words capitalized even though they do not refer to God or something Godly?