What is the “ponytail” in a knight's helmet called?

Does the ponytail thing in a knight's helmet have its own name? Or are they just called ponytails? 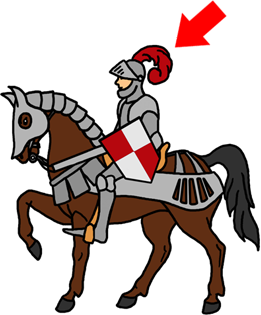 late 14c., "a feather" (especially a large and conspicuous one), from Old French plume "soft feather, down; feather bed," and directly from Latin pluma "a feather, down; the first beard," from PIE root *pleus- "to pluck; a feather, fleece" (cf. Old English fleos "fleece"). Meaning "a long streamer of smoke, etc." is first attested 1878.

The Roman plumes were made from horse hair though. Feathers would not survive long.

8
What are these wheels called in English?
10
What are these vehicles called in the United States?
3
What is the word for the hole/cup at the top of a knight's helmet from which a plume streams?
1
The person who requests something is called…?
5
What is this type of hat with small pom-poms at the sides called?
4
What are the strings outside the baseball bat called?
3
What is the name of this thing shown in “Call Me By Your Name” movie?
13
What are these things that surround museum exhibits called?