What is the origin of the idiom 'all the rage'?

There are various expressions in English and other languages that use all, for example all right, or all dressed up and ready to go, however all the is not that common.

The use of rage is even stranger, which of its many meanings is used here?

Perhaps that of burning desire or furious intensity? The word's origin is from the Latin rabies which means madness. Is that the meaning it had when the idiom entered the language?

So, my questions are:

The word rage comes through French from Latin rabies, "frenzy, rage, madness". The English word apparently went from rage "vehement passion" to the fixed phrase the rage meaning "the latest fad"; then the expression x is the rage was intensified by adding all, similar to the way you can add all to other things, like x is all messed up.

According to the Oxford English Dictionary, the oldest sense of the English word rage as used in the 13th century was "madness; insanity; a fit or access of mania. Obs. exc. poet." (sense 1a).

The sense of "a vehement passion for, desire of, a thing" (sense 7a) was already used by Shakespeare, in it oldest quotation:

1671 Milton Samson 836 Call it furious rage To satisfie thy lust. ns iii. 65 The rage which possesses authors to read their writings aloud.

The oldest quotation for the expression (all) the rage (sense 7b), "said of the object of a widespread and usually temporary enthusiasm", is from 1785:

I'm not entirely sure whether the quotation from 1785 already has x is the rage as a fixed expression; the earliest quotation for that is from 1834:

1834 Lytton Last Days of Pompeii I. i. 173 Sylla is said to have transported to Italy the worship of the Egyptian Isis. It soon became ‘the rage’—and was peculiarly in vogue with the Roman ladies.

At the same time, adding an adverb to intensify the predicate the rage was already in use:

1837 Marryat Perc. Keene ii, In a short time my mother became quite the rage.

And the oldest quotation with all is from 1870, although that may not mean much for its earliest use:

In 1940, the term was apparently thought of as typical of the period after 'the war', which is presumably the First World War:

1940 Graves & Hodge Long Week-End iii. 38 After the war the new fantastic development of Jazz music and the steps that went with it, became, in the comtemporary phrase, ‘all the rage’.

Cerberus describes the evolution of the phrase well, and I'm surprised it's so old - it still feels quite new. Here's some antedatings.

First, the OED online has shuffled their senses around a bit (the Shakespeare 1593 quote has been amended to 1594; the 1785 has been dropped; the 1802 has moved to the "vehement passion" sense and strangely), and found some antedatings of their own:

As complement: a widespread, temporary fashion or enthusiasm; esp. in to be (also become) (all) the rage .

1780 E. Griffith Times iii. 31 Eating is the rage, the high ton at present, and indeed is one of the most refined of our modern studies.

And they found an earlier "all the rage":

1832 E. C. Wines Two Years & Half in Navy 7 The Navy is all the rage at Norfolk. Its officers are in great demand.

I found an earlier example of "the rage" for a temporary fashion. The earliest in The Critical Review. For the Month of June, 1762:

Such is the rage of fashion that men of real genius have been seduced into this senseless mode of writing, only to remain contemptible examples of misapplied talents.

This one is good, so I'll include it as well. The Town and Country Magazine, Or Universal Repository of Knowledge, Instruction, and Entertainment for August, 1775 (Volume 7) printed a letter concluding "Such is the rage for Regattas" that deserves printing in full: 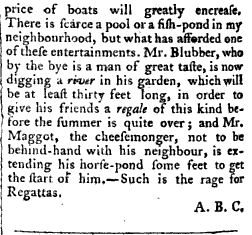 Lay up, lay up by all means--place it in the bank--you do not want it yourselves, and do any thing with it--bury it rather than give it to those that have occasion for it.--This is all the rage; yet, while we think, talk, and act in this manner, we profess to believe the Bible!--We call ourselves Christians--and at the fame time we intentionally, uniformly, and with all the powers of body, and mind, act in direct opposition to one of the plainest commands of him after whose name we are called! 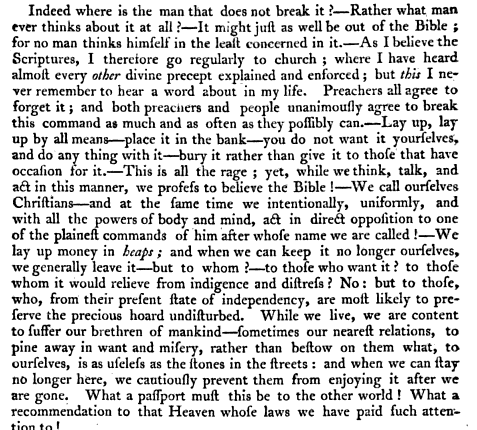 When people discover a traditional but unusually formed expression they sometimes try to rationalize it by reforming it into what amounts to an eggcorn. "All the rage" is definitely traditional, not "all the rave." The latter is probably influenced by expressions like "raving about," meaning "enthusiastically praising." "He couldn't stop raving about his new convertible."

The existence of dance "raves" probably encourages the use of the word "rave" as a noun.

The OED really says all you need to know, but here's what another source (Christine Ammer, The American Heritage Dictionary of Idioms) says:

all the rage Also, all the thing. The current or latest fashion, with the implication that it will be short-lived, as in In the 1940s the lindy-hop was all the rage. The use of rage reflects the transfer of an angry passion to an enthusiastic one; thing is vaguer. [Late 1700s] These terms are heard less often today than the synonym THE THING."

Since this was written "the thing" has morphed into "a thing."

See also the entries for "all the rage" at Cambridge Dictionaries Online and Collins English Thesaurus.

This has maybe been said, but I couldn't find it in the responses. It seems to me that the clear origin of this expression comes from the verb definitions 2 and 3. The moving, spreading, prevailing associations of 'rage' are suggested in the noun, as in something that spreads uncontrollably, like the trends that we use this expression to describe. As for "all the", I have a vague memory of other expressions being constructed like this from around the same time period, but I can't think of any examples.

It's an incorrectly heard form of "all the rave", which is used to describe a topic that is "raved" about by the masses.

A loose example: "Stark raving mad" or "raving mad" is commonly used to describe an individual who is yelling nonsensically.

All the rage is nonsensical as "All intensive purposes" vs. "All intents and purposes", or "Eggcorn" vs "Acorn". Someone misheard it and it was perpetuated colloquially, that's all there is to it.

See the definition of Rave for more information.

EDIT: Holy Jesus, no disrespect, but how did you all get so far into this that you delved into the bible to make sense of this? Occam's razor, fellas.

12
What is the origin of the expression "to twig to something"?
0
Word that encompasses "passion" and "suffering"