I was watching the movie L.A. Confidential last night, and was reminded of the phrase "on the QT", which Danny DeVito's character says several times.

Off the record, on the QT, and very hush-hush...

I was wondering if anyone can shed any light on the origin and meaning of this phrase.

Apparently Q.T. is derived from quiet and originated in the 19th century, although its provenance is not certain.

The slang term 'qt' is a shortened form of 'quiet'. There's no definitive source for the phrase 'on the q.t.', although it appears to be of 19th century British origin - not, as is often supposed, American. The longer phrase 'on the quiet' is also not especially old, but is first recorded somewhat before 'on the qt', in Otago: Goldfields & Resources, 1862:

I found an earlier (1874) appearance of Q.T. that shows its origin is most likely from the British side of the pond. This clip appears in an American publication of short plays, but this particular farce, My Husband's Secret by Walter Devereux Whitty, Esq., shows on its title page (scroll up four pages) that it played first in London. Here's the clip:

A note on the date: Google Books lists this publication's date as 1876. The play's title page has its copyright date as 1873. I cross-checked the date of the play at Open Library, where it has 1874.

Edit: Found an antedating of on the quiet, mentioned in @Robusto's answer, from a horseracing story in New Sporting Magazine, 1847:

"Q.T." is an odd abbreviation for "quiet." Since it is of British origin, I would think it would derive from schoolboys' abbreviations, often derived from Latin. The Latin taceo means "not to speak" and has solemn meaning sometimes, referring to "passing over in silence." Thus quae tacenda, or q.t., would refer to "things about which one should not speak." Cf. Horace, Epodes, 5.49, where Horace speaks of Canidia and quid dixit et quid tacuit, what she said and what she left unsaid.

Edit: That in "My Husband's Secret" Straps says that "Q.T." is an abbreviation for "quiet," as one "should have larned at Hoxford," is a pretty good indication that Q.T. for "quiet" is a false etymology. At Oxford and elsewhere schoolboys' lessons in the classics would have occasional obscene expressions. I can imagine a teacher explicating a classical text, and then coming to the obscene part, and stating that "here there are quaedam tacenda [certain things about which one should keep silent]." These would be frequent enough that schoolboys' notes would refer to these as q.t. Then the term would be brought into ordinary conversation, e.g., referring to a master—"he drinks too much, and there are q.t. [i.e., he chases underage boys]." Then the term would be used for schoolboys' pranks: "I'll join you on this, but only on the strict q.t.," i.e., we won't brag about this even to our fellows.

All this just a guess, but I think a good one.

According to The Phrase Finder, the origin, while somewhat uncertain, is most likely 19th-century British.

Daily Writing Tips, on the other hand, puts forth some argument for the US origin since the phrase is documented to have appeared in print in 1884, and was in a song in 1879.

World Wide Words cites the use of "QT" as an abbreviation as a clear sign that the origin must have been US, based on abbreviationism being a known linguistic feature of late 19th-century American English.

All three are clear that the QT is short for "quiet" and the phrase means "confidential" or "off the record".

The OED says it comes from the first and last letters of quiet, and is chiefly used as on the (strict) q.t..

Their first quotation is:

I found an antedating.

The University of Reading's Spellman Collection of Victorian Music Covers lists a song called You should see us on the strict "Q.T." from 1877 illustrated by Alfred Bryan, composed by Walter Redmond and written by Geoffrey Thorn. 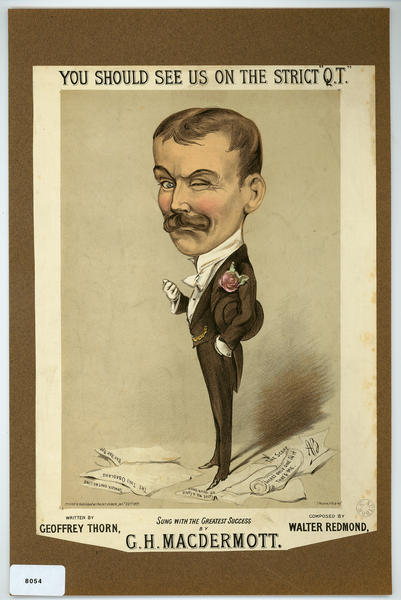 Caricature portrait, full length, of G H Macdermott; the titles of some of his songs around his feet.

And it includes the text:

(Chorus) Oh my! what a pious world this is
And how very good we all seem to be
What a duffing lot you find
If you only raise the blind
And see us on the strict "Q T."

The Facts on File Encyclopedia of Word and Phrase Origins

As to on the q.t., in The Facts on File Encyclopedia of Word and Phrase Origins, Robert Hendrickson states:

"A British broadside ballad (1870) contained the line 'Whatever I tell you is on the Q.T.'"

It would be good to know the name of the ballad in order to follow up this assertion. Unfortunately, the author doesn't give it, from which we can only suppose he didn't know it himself. Without some supporting evidence that claim has to be in doubt.

7
What is a word that describes a secret that passes on from a person to person?