“Thought is a thread, and the raconteur is a spinner of yarns"

“Thought is a thread, and the raconteur is a spinner of yarns"

What does this metaphor mean and what is the origin? I know it is an ancient one, but couldn't find anything else! Is it obsolete now?

To spin a yarn is an idiom/metaphor for telling a long tale. From Etymology online [bold is mine]:

An ancient metaphor: thought is a thread, and the raconteur is a spinner of yarns — but the true storyteller, the poet, is a weaver. The scribes made this old and audible abstraction into a new and visible fact. After long practice, their work took on such an even, flexible texture that they called the written page a textus, which means cloth. [Robert Bringhurst, The Elements of Typographic Style]

So it is a play on words.

If thought can be seen as a thread of conciousness, then the story-teller is spinning long threads together into yarn, which is spun thread. 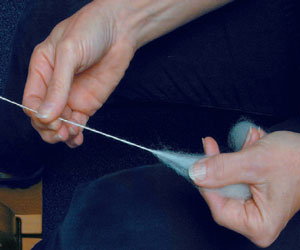 Robert Bringhurst then continues to use yarn as a metaphor which is woven into a poem.

Weaving and storytelling (and lying) have been associated as far back
as anyone can trace in Indo-European cultures:

The metaphor is obvious; you tell a story like you make clothing. Repetition and pattern, moving the story along a path like a piece of thread you're spinning, putting large pieces together, crafting small pieces carefully, to get things put together right. It's art and it's craft and it's a valuable skill. Especially in a non-literate society.

including these, where the textile metaphor has an association of telling lies:

Not the answer you're looking for? Browse other questions tagged meaning etymology metaphors archaicisms or ask your own question.

8
Where does the idiom “whole cloth” come from?
-1
Origin of “Made out of whole cloth”?
1
Etymology of “Email Thread”