Is there a term for someone who "can see multiple perspectives"?

A colleague of mine is trying to describe herself as "capable of seeing a situation from multiple perspectives" or "able to look at the big picture from various viewpoints". I feel like there must be a better way to get this point across.

Is there a more concise way to describe this characteristic?

There are more synonyms under the link for "broad-minded".

Interestingly, perspicacious has etymological roots which are similar to perspective./

I would suggest the following:

comprehending mentally; having an extensive mental range or grasp.

of broad scope or content; including all or much

not influenced by personal feelings, interpretations, or prejudice; based on facts; unbiased: an objective opinion.

The expression, a critical thinker could fit. It is an invaluable academic skill which once learned is never forgotten.

It means not taking what you hear or read at face value, but using your critical faculties to weigh up the evidence, and considering the implications and conclusions of what the writer is saying. 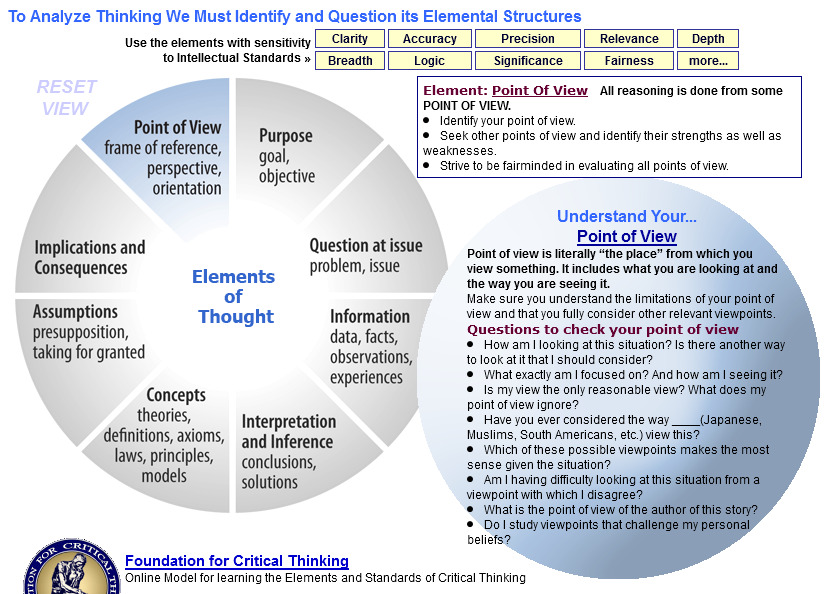 and finally on Wikipedia we have this (emphasis mine):

Critical thinking is a way of deciding whether a claim is always true, sometimes true, partly true, or false. It can be traced in the West to ancient Greece with its Socratic method and in the East to ancient India with the Buddhist kalama sutta and abhidharma literature. Critical thinking is an important component of most professions [...] Critical thinking employs not only logic but broad intellectual criteria such as clarity, credibility, accuracy, precision, relevance, depth, breadth, significance, and fairness.

I think the personality trait you are looking for is perceptive:

People who tend to focus on taking in information prefer Perceiving because they stay open to a final decision in order to get more information.

Your colleague could be a divergent thinker.

a thought process or method used to generate creative ideas by exploring many possible solutions.

I'd propose "man of vision".

(But not necessarily visionary, which seems to be taken with a slighly different meaning)

Someone with kaleidoscope eyes can be said to see things in multiple perspectives.

Capable of using both brains (right and left) where the left brain can process in sequence and the right brain can comprehend simultaneously. Leonardo DaVinci was a classic thinker capable of seeing and articulating in multiple dimensions.

A person capable of seeing a situation from multiple perspectives might be referred to as schizophrenic, using the word in its slang sense “Behaving as if one has more than one personality”. However, this is not necessarily a “better way to get this point across” vs phrases like “able to look at the big picture from various viewpoints” mentioned in the question.

One might also say, informally, “able to walk in other people's shoes”.

Does she see all situations in multiple perspectives?

There's two perspectives for this: open-minded and unfocused.

A Devil's Advocate can see multiple perspectives and argue them effectively.

Not the answer you're looking for? Browse other questions tagged word-choice single-word-requests terminology expression-choice or ask your own question.

2
What is the term for both sided thinking?
6
What is the word for a hard-to-solve solution spoken intuitively, relaxedly and playfully?
2
What word describes someone who is neutral in any dispute?
3
What word best describes a person who has the ability to understand two opposing opinions

10
Adjective to describe someone who is knowledgeable, resolute, and calm
2
What's the best term for a cognitive state where you can't quite build the components up to achieve the solution?
1
What word do I use to describe people from India & neighboring countries
2
Are there any more options for describing perspective than 1st, 2nd or 3rd?
2
Describing a group of windows?
1
A word/phrase for someone who finds significance in anything/tries to rationalise anything
0
A word for feeling unequal or disconnected from someone due to prejudice?
0
Single word equivalent for short, natural length grass?
0
What is the best term for 'perspective options'