What is the difference between "skeptical" and "cynical"?

Both the words "skeptical" and "cynical" refer to a doubtful mood, but what is the basic difference between them?

meaning differences adjectives
Share
Improve this question
edited May 15, 2013 at 21:55

Skeptical means “having reservations”. Someone who is skeptical will not easily be convinced, will be hard to persuade.

The main meaning of cynical is “believing the worst of people”, or as NOAD says, “distrustful of human sincerity or integrity”. By extension, it has come to mean “doubting something will happen”, which can be somewhat close in meaning to skeptical in some cases, but not generally.

It can be summed up by an illustration: 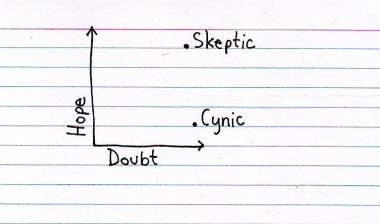 A person who is cynical generally has a very bad outlook on life, and has very little faith in others.

A person who is skeptical is more likely to put in the appropriate research before believing what they are told.

Someone who is cynical usually assumes people are out to screw them. Someone who is skeptical understands there are bad people out there, and that is why we must be careful and deliberate in our decisions.

The meaning of cynical is:

The meaning of skeptical is:

The words have different meanings; even in the case they both mean having doubts, cynical has a more specific meaning.

The examples reported from the NOAD of sentences containing cynical or skeptical are the following:

Most residents are cynical about efforts to clean mobsters out of their city.
He gave a cynical laugh.
Stalin had struck a cynical deal with Hitler.
The public were deeply skeptical about some of the proposals.

A person is rarely a cynic. Cynicism is a transient attitude which is modified in the light of changing conditions and can be just as healthy as skepticism. The implications above that one may switch from one to the other without intervening new information and consideration, is ridiculous. I had hoped that my diatribe would have made this clear.

The cynical desire of History Channel to attract viewers by including irrelevant and even incorrect material teaches me to be skeptical of its production values. If the History Channel were to become more fastidious about their product I may become less cynical and therefore less skeptical of what they present as history.

For example; In a program about Hitler's religious affiliations, the History Channel made great effort to prove that the madman was not a Christian and therefore the Christian Church could wash it's hands of indirect responsibility for his actions. In the final minute they presented a statement from Hitler that was totally anti-Christian, but it was later found to be a cherry-pick collection of words from many statements Hitler had made, not a single speech at all. Yet a viewer reading that statement off the screen would be convinced and unaware that he was being manipulated. My cynicism has been generated by History Channel's action in trying to deceive me and so I am now skeptical of HC as a source of reliable information. Such cynicism in pursuit of a different outcome justifiably generates prudent skepticism of the source.

I'd never had a problem with differentiating the two but I cannot agree with some of the clear divisions mentioned here. Both are variables dependent on the place, the time and the people.

For an illustration of this other place — time and people, I choose History Channel and its need to fill empty program hole with something that will grab the attention of new viewers of a younger generation. As these programs are inevitably being produced by those of the same later generation, they lose the perspective of older presenters and are punctuated with reactions of "wow!" and "unbelivable!" and detail that avoids getting to the core of the matter. Therefore I have become cynical about these presentations. Not skeptical because I know that what they present is true but their distraction with mind-blowing detail causes the producers (and therefore the viewers) to be led away from the core of the matter.

Hitler as Military Commander is an extremely succinct title which sets a goal that does not allow for much graphic detail and would therefore be boring to those who come looking for such excitement. To my knowledge History Channel has not yet approached this topic and I hope they do not, because my skepticism leads me to expect that the current producers could not resist the temptation of straying beyond the threshold of necessary graphic detail into the field of blood and guts. This was not the prime consideration of Hitler or even any of his generals, they were all cynical enough to think they were doing someone else a service when they were actually serving their own cynical need to command. With rare delightful exceptions, History Channel is doing the same instead of serving History, and because of this I am cynical of its purpose and skeptical about its ability to stand separate from the back-ground noise.

Skeptics require evidence for claims made. The main tool of their trade is critical thinking. Skepticism is the base attitude for delving into other areas: religion, science, science-based medicine, cultural mores, etc. It is an honest, though not always easy, way to approach life, and bears great fruit. Cynics do not believe in inherent 'goodness', morality. Thus, most things are wrong, bad, conspiratorial. Evidence doesn't necessarily sway a cynic, as they abide by a relentless confirmation bias and stick to their guns. In defense, life dishes out relentlessly harsh realities, which in some leads to justifiable cynicism. Cynics are generally pessimistic and set, while skeptics remain open, but not so open that your brains fall out, as James Randi said. There is obviously much gray area here, after all, we are dealing with the human condition. Better to be a skeptic most of the time, but be a rabid cynic when called for. There's probably something cynical in each one of us.

Not the answer you're looking for? Browse other questions tagged meaning differences adjectives or ask your own question.