Origin of the term "High and dry"

The term "high and dry" has always confused me. As in the case provided by the Merriam Webster online dictionary:

The inadequate supplies of vaccine left many people high and dry when the flu season arrived.

I understand the meaning of the term, to be outside of the area of help, but I don't understand how this expression came to be used for such a situation. Where does this expression originate from? How did it come to mean what it means today?

The answer is available at phrases.org.uk.

This term originally referred to ships that were beached. The 'dry' implies that, not only were they out of the water, but had been for some time and could be expected to remain so. It was used in a 'Ship News' column in The [London] Times, August 1796:

"The Russian frigate Archipelago, yesterday got aground below the Nore at high water, which; when the tide had ebbed, left her nearly high and dry."

The term has been around longer, though I am not able to trace it back any further than 1654 by Jacob van Oudenhovens. In Dutch the term in those days was "hoogh ende droogh", which was generally used for all places that the sea didn't reach.

In Europe the sea has always been a big factor and with regular floods since ages back "high and dry" was a way of live. The terpen in the North European Plain are a reminder of those days.

The OED's first quotation is 1822 but I found an antedating almost a century earlier. It appears in A new account of the East Indies: being the observations and Remarks of Capt. Alexander Hamilton (1727, Volume 1, page 254):

And the Virgin Mary, to shew her Kindness, and Skill in Navigation, stood a whole Night on the Forecastle, directing the Devil how he mould steer, and behold, to the great Admiration of all concerned, the Ship was high and dry in the Morning, in a Valley on the South Side of the River of Goa, about half a Mile within the land.

I'll include the full section as it's quite a tale. 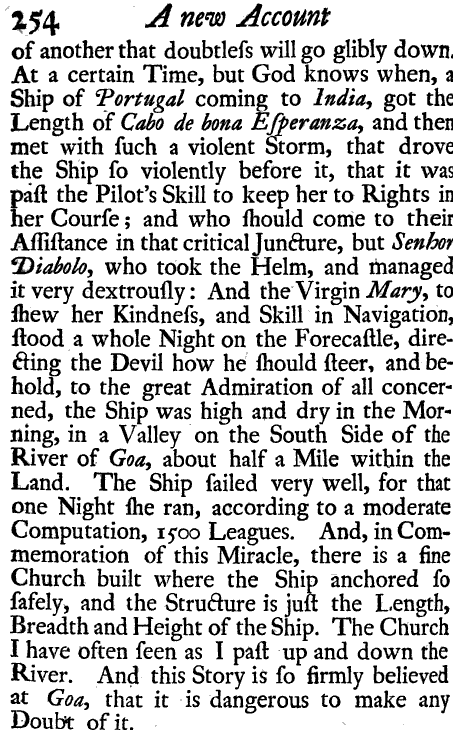 The church is A Igreja de Nossa Senhora da Ajuda (or The Church of Our Lady of Help) in Ribandar, on the banks of the Goa river.

The Church of Nossa Senhora da Ajuda (Our Lady of Help), which is situated at a little distance from the hospital, makes up Ribandar's important landmark of all. A legend claims that the church owes its construction to the miraculous appearance of the Virgin Mary, to save a Portuguese ship which was caught in the eye of a terrible storm at the Arabian Sea. The Virgin Mary herself is said to have stood on the forecastle throughout that fateful night, directing the devil (!) himself to steer the ship to safety. To commemorate the miracle the beautiful church stands where that ship had found a safe mooring, the edifice being just the length, breadth and height of the legendary ship.

Finally, here's a photo of the church's ship on wheels.