There are many homonyms in the English language, words that are spelled the same and pronounced the same but have different meanings. A few examples:

Are these considered one word or two? Does it perhaps depend on their etymology? Maybe if both meanings can be traced to the same root they are one word and if they derive from different sources they are two? Alternatively, how are words defined? Is it in terms of spelling, of meaning, of origin or a combination of the three? The free dictionary defines word as

A sound or a combination of sounds, or its representation in writing or printing, that symbolizes and communicates a meaning and may consist of a single morpheme or of a combination of morphemes.

That definition can be read as describing homonyms being both single (a word is a representation of sound in writing) and multiple (a word communicates a meaning) words.

Dictionaries have long had to contend with this issue. The word run, for example, has 50 or so meanings as a verb, and another 30 or so as a noun, but they all are grouped under one single dictionary entry. On the other hand, bow has three separate entries.

Most print dictionaries denote this using superscripted numerals for each separate entry, much like NOAD does (see screen shot below). In contrast, the online dictionary by Collins uses a numeral in a blue square for each entry to denote the same thing, as can be seen at their listing for bow).

As for your last example:

I came to see the Bishop's see.

I'd say that see and see are not the "same word," based on how they are listed in the dictionary.

However, as John Lawler has mentioned in his comments, it depends on who is counting, and what the count represents. In the sentence:

He had had a cold.

had and had are two separate words (it is a five-word sentence, after all), yet those two hads happen to map to the same dictionary entry, whereas, in the earlier sentence, see and see map to two different dictionary entries.

So it all depends on what your definition of word is. 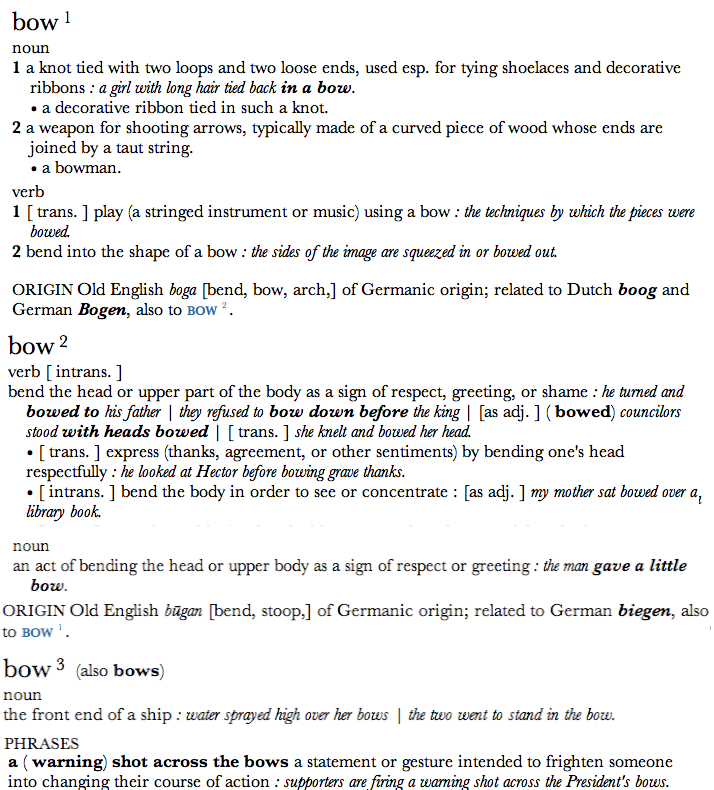 NOTE: Some definitions have been removed from this image in the interest of conserving space

A word is a sound (in speech) or a letter-group (in writing) that has a particular meaning. So "bear" and "bear" and even "bare" are distinct words. Even words that mean the same thing (like "automobile" and "motor car") are different words (obviously).

One of the most striking examples of a homophone is the pair "entrance" and "entrance" (accent on the first syllable, or on the second).

Not the answer you're looking for? Browse other questions tagged homophones homonyms or ask your own question.

5
What are "identical words" as distinct from homonyms?
0
specific term for words that imitate sounds
1
Is there a terminology for "one word, multiple distinct etymologies"?
0
What word in the English language has the most independently derived homonyms?

3
How did homonyms come into existence?
5
What are "identical words" as distinct from homonyms?
2
Homonyms/homophones and proper nouns
6
Homophones/Homonyms/Homographs
209
Are "whores" and "horse" homophones?
3
Extreme homonyms
0
Are "wuzzy" and "was he" homophones?