What is a less wordy way of describing how this car is situated?

I'm sitting on a bench in a park and I see this car sitting in the middle of a side street. Well, it's not actually in the middle of the street, but like right at the spot where you're about to make a right/left turn out onto the main road. It's been sitting there for about half an hour now. It's not an intersection where the car is at, it's just a side street that's leading off from the main road. If I were to describe what I had seen to someone else, how do I say it without sounding too wordy? For example, instead of describing all that I've just did above, is there a single expression that can describe the position of the car at where it's sitting, like "The car have been sitting at the [...] for half an hour now without moving, there have been no cars coming out or else it would have gotten chased off". 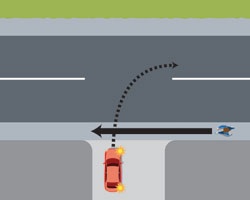 In British English, the word you're looking for is junction.

The car has been sitting at the junction for half an hour without moving.

Not the answer you're looking for? Browse other questions tagged expression-choice or ask your own question.