My immediate thought is that the term is generic, and yet I read recently a verbal brickbat described as ad feminam. Was that just a po-mo back-formation, or is there some merit to the distinction?

[Mind you, it's likely I saw it in the same office where a proofer once changed an unrelated text I wrote to read ombudsperson, so ....]

I've certainly only used it or seen it used as a generic, gender-neutral term. (And only in the phrase ad hominem.)

As Kosmonaut mentions, part of it is that it's in a different language, so any gender mismatch* is not going to be apparent to people unless they know some Latin. But there's also the fact that classically, in many languages the word for "man" had two meanings: (1) a masculine person, and (2) a member of mankind; a person (of unspecified gender). Modernly, the second meaning is sometimes seen as prejudiced against women, and thus people come up with all sorts of newfangled constructs to avoid that usage. Thus you get (hopefully**) deliberate plays on words like "ad feminam", which doesn't actually mean much of anything, but is understandable if taken in parallel with ad hominem.

* As JSBangs points out, homo is not actually the Latin word for a specifically masculine person — that would be vir — so there actually is no gender mismatch with using ad hominem when the subject of the attack is female.

** If the usage was not deliberately playful, but meant sincerely and literally, I would find it to be sad evidence of the decline of society.

No one seems to have pointed out, so far, that the Latin words for male man and female woman are not "homo" and "femina" but vir and femina.

Homo does not refer to "man" as in "male", but man as in "human". That's (part of the reason) why male things are "masculine", and not "hominine"!

Ad hominem, in Latin, literally means to the person; it doesn't make any reference to the sex of the person.

Ad feminam is found in the Corpus of Contemporary American; it seems a "back-formation", as it first appears in the period between 1920-1929. 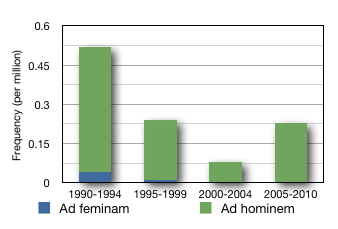 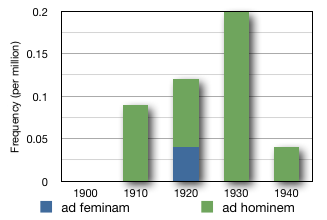 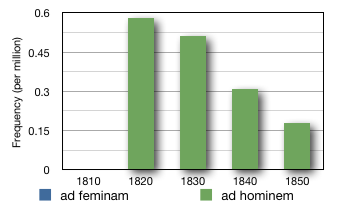 As Churchill said, "the masculine embraces the feminine." It's Latin, so I think only the most, as you say, po-mo pedant would object to ad hominem. In any case, ad hominem describes the argument, not the target. The fact that the target is a woman is irrelevant, IMHO.

To take it one step further - the term "ad hominem" has a meaning in English that it doesn't in Latin, since it's part of a classic list of fallacies. The term "Ad feminam", whatever other merits it may possess, is simply not included in that list. So when you use "ad feminam", you're simply losing accuracy. Not to mention that the listener probably doesn't speak Latin, and may not have any idea what it's supposed to mean.

I think if we were Latin speakers, then there would be merit to the distinction. But we're not, and hominem doesn't mean anything to the average English speaker on its own; it only means something as part of the phrase ad hominem, which is used to describe the insertion of a personal attack into a debate. The "man" meaning from Latin is not particularly transparent to English speakers, and so it is not a problem. (Think of similar things like "fraternal twins", which is happily applied even to girl twins.)

Phrases like ombudsman do have a transparent structure, at least in the -man suffix, which many English speakers directly link with the noun man. So, this type of word would be much more likely to become "neutralized" in the name of political correctness.

Whoever used ad feminam was almost certainly using word-play intentionally, and I think it is safe to say that this word is not likely to establish itself in the standard lexicon.

I would reply to tchrist that homo- in "homosexual" is indeed a root meaning "same", but not a Latin one. It is a Greek root illogically attached to a latin noun. Homo, hominis DOES mean "man" in Latin, not "same" – see Homo Erectus, Homo Sapiens, etc. However, not having the required 50 points, I cannot reply directly.

To answer the question, Ad Feminam is correct if you want top be specific as to the gender of the person to which one refers to. However, as was mentioned before, Homo also takes the general meaning of mankind, as it still does to some extent in modern languages – like in the expression "manslaughter"in English, or in the French "Déclaration Internationale des Droits de l’Homme", instead of the more contemporaneously PC "Déclaration Internationale des Droits des Humains"), etc.

Anyway, I believe more or less everything I said was already mentioned before. But I just wanteds to add my cherry onto to the Homo cake.

Not the answer you're looking for? Browse other questions tagged latin gender-neutral or ask your own question.