Does “drape oneself in something” have the meaning of “be armored in”?

Gabe Rottman , a legislative counsel and policy adviser at the Washington legislative office of the American Civil Liberties Union contributed an answer to the question, “Is it wrong for credit card companies to process donations to extremist organizations?” in the Room for Debate section of New York Times (August 8) - http://www.nytimes.com/roomfordebate/2013/08/08/the-ethics-of-doing-business-with-hate-groups/cutting-off-financing-to-hate-groups-is-unwise-censorship

" Credit card companies are private businesses. They generally have the right, including possibly the First Amendment right, to refuse to deal with anyone. While superficially appealing, that answer is wrong. Pulling credit card services helps the haters and hurts free expression.

First, there’s the “martyr” problem. Back in 2010, PayPal threatened to cut off Pamela Geller, the anti-Muslim blogger, for violating its “acceptable use” policy. Geller immediately draped herself in the First Amendment — and put out a call for donations. PayPal eventually relented, but it’s clear that the denial of services to a “hate speaker” transformed her modest soapbox into a wider broadcast."

As I was unfamiliar with the expression, 'Geller immediately “draped herself in” the First Amendment,' I consulted Cambridge, Oxford, Merriam-Webster online dictionary, none of which carries “drape oneself in stg” as an idiom.

The writer is extending/modifying another expression which is much more common: to wrap oneself in the flag, meaning to deflect criticism by claiming that your actions were motivated by patriotism.
The First Amendment to the United States Constitution guarantees freedom of speech - or, I should say, it's commonly understood to guarantee freedom of speech; in fact, it merely says that Congress may not pass a law abridging speech - so actions by private individuals or corporations, such as PayPal in this case, are most definitely not covered.

The writer is saying that Geller was appealing to the great American tradition of defending even odious hate speech against censorship - even though such a usage reflects a gross misunderstanding of Constitutional principles; PayPal has the same freedom that Geller does, including the freedom not to process her credit card payments. Of course, simply having the freedom to speak or act doesn't make that speech or that act a good idea, as the writer points out; Geller ended up better off (and with a much higher profile) than before PayPal cut her off.

The usual version of this phrase is drape oneself in the flag:-

If someone wraps themselves in the flag, they pretend to be doing something for patriotic reasons or out of loyalty, but their real motives are selfish. ('Drape yourself in the flag' is an alternative form of this idiom)

Drape oneself here means to don a voluminous draping garment like the toga worn by ancient Roman "citizens": 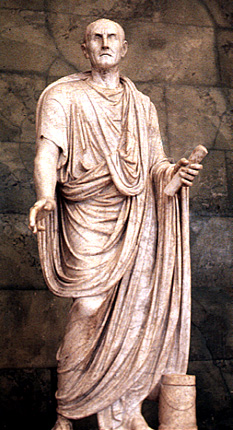 In Western iconography it is symbolic of Statesmanship and Ancient Republican Virtue. (Republican as opposed to Monarchist or Imperialist, not as opposed to Democratic - though in fact most of the togata, the toga wearers, were just as antipathetic to democracy as to monarchy.)

I think your quote uses the word 'drape' to mean 'lavished' as opposed to 'armored'. As in, lavishly used something, used it up, such as an overabundance of lotion is lavished on one's body. Suggesting that she used the amendment too much.

Not the answer you're looking for? Browse other questions tagged meaning idioms usage or ask your own question.