What's the difference between “to and fro” and “back and forth”?

I'll give you an example from "The Mask of The Red Death" by Edgar Allan Poe:

"Its pendulum swung to and fro with a dull, heavy, monotonous clang;"

How does that differ from:

"Its pendulum swung back and forth with a dull, heavy, monotonous clang;" ?

How frequently "to and fro" is used these days?

It doesn’t really mean anything different. The archaic fro occurs only in that phrase. It used to be by far the most common way to say that, but no longer is: see this Google N-gram: 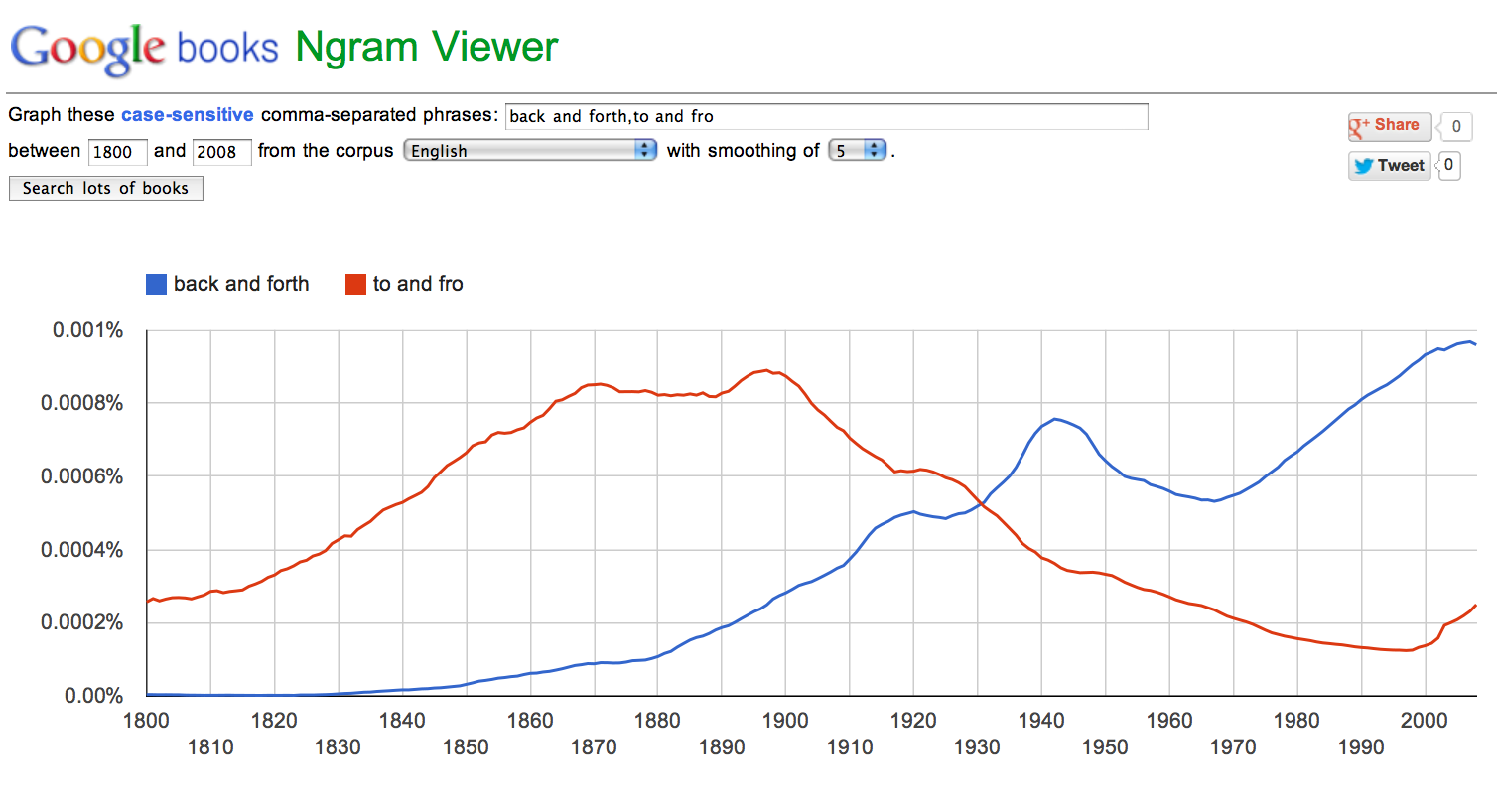 Nonetheless, to and fro still occurs fairly frequently, so is by no means uncommon.

In the example you cite, to and fro is essentially identical in meaning to back and forth.

However, to and fro can also carry the less specific sense of ‘moving about in different directions,’ similar to here and there, as in

The lambs frolicked to and fro on the grassy hill.

To and fro is alive and well in present-day English usage, but it sounds somewhat antiquated and may seem unduly whimsical if used in a serious context (few today would use it to describe the motions of a torture implement). There is also a noun form of the phrase, usually hyphenated (to-and-fro), which means debate or vacillation:

There's been an awful lot of to-and-fro about the appointment of the club's new treasurer.

I would suggest and concur that it has a less specific meaning than 'back and forth' however this is likely the most common application. As in the example given about the sheep, I would further suggest (and I have not looked it up) that 'to' means 'near' or 'close' and 'fro' means 'far' or 'away/yonder'. Closer to 'here and there'.

To my understanding knowledge and experience, it is not "to" (close) and "fro" (away), rather I heard and it is self explanatory, "to" is (to) and "fro" is derivation of (from).

Suppose some one is going to travel to London, and you wish him/her, by saying: "I wish you a safe and happy trip to and fro London, meant both ways safe journey. Don't make it complicated, with self fabricated meanings.

As others said, there is no difference in the usage you quoted. Likewise, and also as said by others, to and fro can be used in a variety of contexts where back and forth wouldn't be appropriate. It, in essence, means that the subject is moving from one thing to another. Back and forth implies movement in a more polarized direction - something that would not be proper having "here and there" replaced with it: Quite unlike to and fro. Here and there, as such, is almost more of a chaotic/wandering bit of movement, drifting aimlessly, as it were. Back and forth denotes a more definitive and narrowly defined set of parameters: Distinctly from A to B.

I might not be explaining that the best, so just instead think about these two examples and your reaction/understanding of them: "He went back and forth" "He went here and there."

See what I mean? Back and forth implies something more distinct and polarized. Here and there is instead far more random and indistinct.

We can also better glean the context of "to and fro" by the original meaning of the two words contained within - those being: To. From.

It is essentially just stripping any further detail away - whereby one might otherwise provide a reference in saying "they went from one spot to another" - "they went to *, from *."

With that being said? Usually to and fro requires actual movement between two points in space, at the same time therefore making it somewhat narrower in potential applications than back and forth can manage for itself.

For example: One can easily say "Their opinion on the matter vacillated back and forth, between agreeing with the shutdown and being vehemently opposed to it." Or else, as with two folks engaged in a rather spirited bit of parlay with one another: "They went at it back and forth, much as two petulant bickering children might do!" You might be able to manage "They went at it to and fro, much as..." but I don't think one really ever would, as it's grammatical correctness in such a fashion is most decidedly... quite murky.

Now then, with all of that being said, my primary reason for commenting was actually to correct a decidedly egregious error (to my mind) that someone else had posted earlier: Where they said that the following quote was correct/proper English: "I wish you a safe and happy trip to and fro London, meant both ways safe journey."

Nobody would EVER say "a trip to and fro such-and-such." Like... not ever! That's simply just not even remotely a conceivable utilization/implementation of this here particular turn of phrase. For one thing, and although it's not necessarily an absolutist rule for this, it usually implies a rather repetitive -almost obsessively so- act of movement, repetitious to the point of going over and over and over again - not a singular trip from point A to point B, only to then return back home to A again; but rather going from A to B to A to B to A to B... and so on & so forth.

But putting even that aside... you just would never, ever, ever say "Their trip to and fro New Zealand was horrible." Not. Ever! Not unless you want to be accused of utterly butchering a rather obscure and infrequently encountered phrase... such as "to and fro" most certainly is in contemporary English.

They do mean the same motion. Most likely derived from the motion of the "froe", a tool used to cut shingles and shakes from a "bolt" or shake block with a rocking motion.

Not the answer you're looking for? Browse other questions tagged meaning history or ask your own question.