Using “with” without an object pronoun?

Growing up I had a friend whose family would constantly say "Are you going with?" or similar. It always annoyed me. Fast forward 20 years and now I have a coworker who does the same.

"I'm going to lunch, do you want to come with?"

It annoys me, but is it wrong?

p.s. Sorry if this is a duplicate. It was a difficult thing to search.

There is a fascinating site for dialect maps made by one Joshua Katz of NC State University, based on a linguistic survey by the University of Cambridge. It shows variations in dialects across the USA in a variety of topics, one of them is this "do you want to come with" that seems to annoy you. 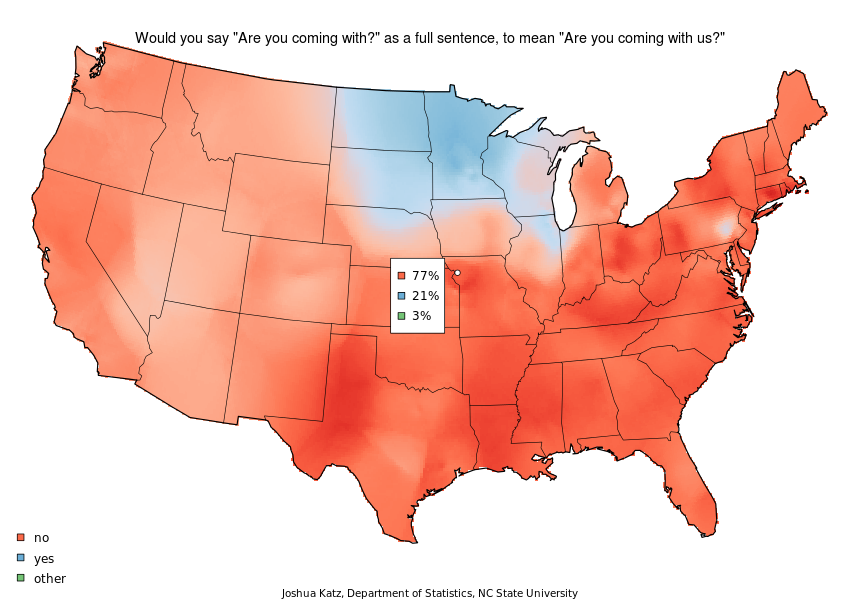 Looking at this map, you can see that "coming with" is distincly common in Minnesota and the surrounding states, but rather rare elsewhere. I suggest following the link above and choosing Question 51 in the drop-down menu to see a full-sized map, as well as geographical distribution of specific answers to this question.

Such distinct usage in a specific dialect strongly hints that while it's not a formal usage that would pass copy editing for a paper or national newspaper, it's certainly not wrong for the dialects it's used in, and it's not an individual idiosyncracy of your coworker trying to annoy you. :)

This language is acceptable in informal speech, net prose, polyphonic prose and informal familiar emails; but when it comes to standard conversational speech, it is in error, as the direct object (me) is not used. It is an unknown antecedent, and it should not be left out when people do not know to whom or what the person is referring, and should only be used when the antecedent is evident from the context of the situation.

Not the answer you're looking for? Browse other questions tagged pronouns pronoun-dropping or ask your own question.

14
Can you grammatically end a sentence with “with”?
1
“Can I go with?”
1
Is there difference between “go with” and “come with”?