The opposite of "magnum opus"?

According to the online Oxford English dictionary, a magnum opus is

a work of art, music, or literature that is regarded as the most important or best work that an artist, composer, or writer has produced.

Does there exist an opposite term (in the sense of the least important or worst work ever produced by someone)? 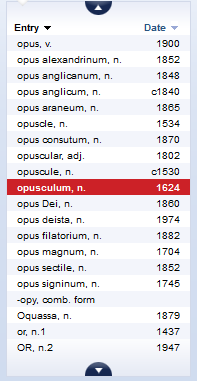 So: make one up. I don't know whether parvulum is widely understood, but it appears in some macaronic Christmas carols, and using a phrase which is similar to magnum opus might give the general idea.

You might take a cue from theater reviews. There are so many epic failures (e.g., Damon Lindelof, Prometheus) that reviewers have to come up with new ways to describe them.

There are some relevant terms, though I don't know if any are as superlative as magnum opus. Possibly this is because we don't usually concern ourselves with relative degrees of failure or insignificance.

If you want a Latin word, opuscule is a good option. From Oxford dictionaries:

A small or minor literary or musical work.

That's very close to the opposite of a masterwork, and even has opus in it, but it's not at all a commonly used term (ODO notes that it is rare).

If you want a term that's more commonly used, the phrase in the definition above, minor work, is a good choice. Somewhat to my surprise, I couldn't find a good definition of the phrase, but it seems to me to be fairly common and has a transparent meaning. One representative usage:

King Stephen is one of Beethoven's minor works, and only its overture is performed with any frequency today.

Looking at the "culmination of life's work" aspect of magnum opus, juvenilia might be a good choice. The formal definition is simply

Works produced by an author or artist while still young.

But there is also often an implication that such works are, themselves, somewhat immature, produced before the artist had achieved full mastery of their art. It also has the benefits of being both Latin and at least somewhat familiar.

If you are open to more creative language uses, marginalia in it's extended sense of "nonessential items" (M-W) might be stretched even further to cover an artist's nonessential or marginal works, borrowing a bit of literary cred from its similarity in sounds to the above-mentioned juvenilia. Or for a very creative choice, I will note that my auto-correct keeps suggesting magnum oops.

The word "minuscule" can be used as a noun or an adjective.

By chance could it be Parvum Opus? Which basically means a minor work —not necessarily bad, though.

It's called a flop. From a search of "flop meaning" on Google:

verb
2. informal
(of a performer or show) be completely unsuccessful; fail totally.
"the show flopped in London"
synonyms: (I've edited this part for shows etc.)
be unsuccessful, fail, fall flat, be a disappointment, do badly, lose money, be a disaster, run aground;

You can also use this as a noun:

The show was a total flop.

This is usually in regards to ticket sales or popular opinion. Even if a show or artwork's critical acclaim is high, it can still be a flop.

The solution doesn't have to be Latin-based, it can be comprehensible, in English, and idiomatic sounding.

However, if one wants to retain the learned and lofty feel of magnum opus, you could travel down the Italian route: opera minore

Not the answer you're looking for? Browse other questions tagged vocabulary antonyms or ask your own question.