Near the end of Book I, chapter 17 of Our Mutual Friend (1864), Charles Dickens writes:

There are the beggars on horseback too, in another sense from the sense of the proverb. These are mounted and ready to start on the highway to affluence.

When I read this, I thought that the "proverb" Dickens was alluding to was "If wishes were horses, beggars would ride." But a note in the Everyman edition of the book says that the relevant adage is "Set a beggar on horse-back, and he'll ride to the devil."

A quick survey of Ngram Reader results reveals an instance of "if wishes were horses" from 1770, in Louis Chambaud, The Idioms of the French and English Languages (1770):

The word pure above stands in for poor.

Meanwhile, from W. Goodall, The Adventures of Captain Greenland (1752), we have this:

But there is an ancient saying, that, set a Beggar on Horseback, and he will ride to the Devil. Now, whether that Saying was verify'd here or not, we shall not presume to understand.

But we also seem to have a truncated version of the saying in John Trapp, Solomonis Panaretos: Or a Commentarie Upon the Books of Proverbs, Ecclesiastes, and the Song of Songs (1650):

The Crown of the wise is their riches; but yet give them a foole, you put a sword into a mad man's hand; the folly of such fools will soon be foolishnesse. Why? was it not foolishnesse before they were rich? yes, but now it is become egregious foolishnesse. [Greek quotation omitted] the earth cannot beare the insolencies of such. Set a beggar on horseback, &c.

And from John Dennis, "The Characters and Conduct of Sir John Edgar: Call'd by Himself Sole Monarch of the Stage in Drury-Lane; and His Three Deputy-Governors" (1720):

But if they [good actors] once dare to grow insolent, if they behave themselves like Beggars on Horseback, and not only ride furiously as soon as they are up, but endeavour to ride over those very Persons who but the Moment before mounted them ; they ought to be us'd like Indians who run a-muck in their own Country, or like Dogs who run mad in ours.

All of these quotations suggest that the adages were thoroughly established at the time of the writers' citing them.

The horseback idiom appears older than the wishes one by around 100 years. The older one seems to be based upon a Latin phrase from around 400 AD, with this particular translation by Robert Burton in The Anatomy of Melancholy of 1621.

If wishes were horses, beggars would ride 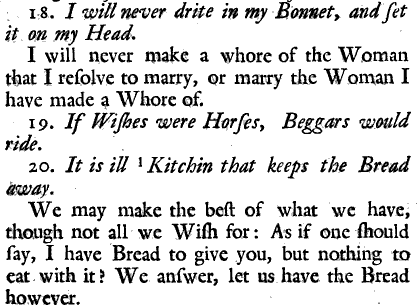 19. If Wishes were Horses, Beggars would ride.

Interestingly, the other horseback idiom also appears in this book, along with a Latin phrase:

More on that later.

Set a beggar on horseback, and he'll gallop

The John Trapp of 1650 appears to be a valid truncation, as three years later we find the full proverb:

Fryar Jhon began to paw, neigh and whinny at the Snout's end, as one ready to leap, or at least to play the Ass, and to get up and ride tantivy to the Devil like a Beggar on Horseback.

"Certaine Prouerbes ... of the English Nation in former Times, and some of this present Age." - Remaines concerning Britaine: But especially England, and the Inhabitants Thereof - Page 272 - William Camden - 1629 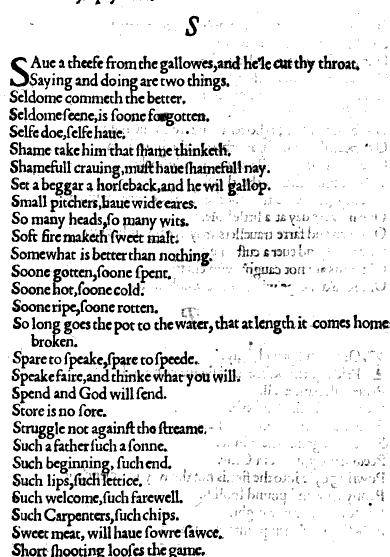 Set a beggar a horseback,and he wil gallop.

And Wikiquote attributes it earlier, from 1621:

Set a beggar on horseback, and he will ride a gallop.

Checking the source, we find a Latin phrase:

And though by their education such men may be better qualified, and more refined; yet there be many symptoms by which they may likely be descried, an affected fantastical carriage, a tailor-like spruceness, a peculiar garb in all their proceedings; choicer than ordinary in his diet, and as Hierome well describes such a one to his Nepotian; An upstart born in a base cottage, that scarce at first had coarse bread to fill his hungry guts, must now feed on kickshaws and made dishes, will have all variety of flesh and fish, the best oysters, &c. A beggar's brat will be commonly more scornful, imperious, insulting, insolent, than another man of his rank: Nothing so intolerable as a fortunate fool, as Tully found out long since out of his experience; Asperius nihil est humili cum surgit in altum, set a beggar on horseback, and he will ride a gallop, a gallop, &c.

Wiktiquote attributes this Latin to the Alexandrian poet Claudianus (c. 370 – 404):

Here's the full passage from In Eutropium:

Nothing is so cruel as a man raised from lowly station to prosperity; he strikes everything, for he fears everything; he vents his rage on all, that all may deem he has the power. No beast so fearful as the rage of a slave let loose on free-born backs; their groans are familiar to him, and he cannot be sparing of punishment that he himself has undergone; remembering his own master he hates the man he lashes. Being a eunuch also he is moved by no natural affection and has no care for family or children. All are moved to pity by those whose circumstances are like their own; similitude of ills is a close bond. Yet he is kind not even to eunuchs.

Some elements for Q1: an earlier version of the first proverb

"If wishes were horses, beggers wald ryde" is dated 1628.

But at the time it seems that a variant of the same phrase was more common, according to Camden in his book on "Remaines concerning Britaine":

"If wishes were thrushes, then beggers would eate birds" (1637)

"Set a begger at horseback and he will gallop"

Not the answer you're looking for? Browse other questions tagged etymology proverbs aphorism or ask your own question.

8
An apple a day keeps the doctor away
19
Time and tide wait for no man
5
Who is the author of “Absence makes the heart grow fonder”?
24
Is there English proverb or saying equivalent to Chinese / Japanese common proverb 李下に冠を正さず- Don’t touch (redress) your coronet under the plum tree?
47
Are there English proverbs that warn against “speaking up” in front of people?
2
Proverb for “Happiness comes only through hard work”
1
What's the meaning of “When the pig has had a belly full, it upsets the trough”?
6
Is “ no news is good news” of Italian origin?
2
Double meanings of English proverbs