Ask Question
Asked 7 years, 11 months ago
Active 4 years, 6 months ago
Viewed 54k times
14
This question is too basic; it can be definitively and permanently answered by a single link to a standard internet reference source designed specifically to find that type of information.
Closed 7 years ago.

I think "speeded" may have been the appropriate past-tense form for "to speed" in the past, but I wonder if it is still considered the correct form. In spoken English, one usually hears "sped" to communicate the same past action.

This might also be the case with "dived" and "dove," as one rarely hears the former.

The usage stats from the British National Corpus (BNC) and the Corpus of Contemporary American English look as follows:

So sped is preferred over speeded on both sides of the pond, though considerably more so in the US. The interesting part is this, however:

That is, when it comes to the phrasal verb to speed up, the preference is not anywhere as strong in the US, and is outright reversed in the UK.

As to usage over time, the Corpus of Historical American English paints the following picture: 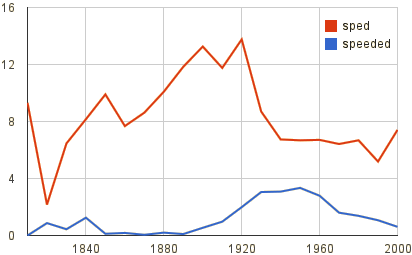 So sped has been preferred over speeded for as long as the corpus data goes back.

Generally speaking, irregular verbs tend to become regular over time, rather than the other way round, though the latter is not unheard of, either. However, the more heavily used an irregular verb is, the less likely it is to change. (That is true of other irregular words, too—for example, you won't see childs superseding children any time soon.)

Dived vs. dove has been discussed elsewhere on this site. See also these related questions:

"Speeded" and "sped" are both correct inflections of the verb "to speed". They both represent its past tense and past participle form. One thing I would say, though, is that if you choose to use one in a text, use that same variant throughout for consistency.

Not the answer you're looking for? Browse other questions tagged word-choice verbs is-it-a-word or ask your own question.

13
Version control messages: what tense?
16
Past-Tense of the Verb “CC”
3
The meteor/meteorite fell over there
0
I need point of view of native speakers on the perfect tense
5
Why not “skydove”?
0
In film, what specific term describes the distinction between “live action”, “CG” and “traditional animation”?
2
What are the differences between “May” & “Might” / “May have” & “Might have” in strict English?