Here is an example from an old book. I know it’s old but it can’t be simply discarded, I hope.

So, I wonder if the following three all mean the same thing?

I would like to know how popular in terms of the usage frequency the combination of dare and a perfect infinitive is.

This is a very rare usage and cannot be regarded as idiomatic today.

Dare is an odd word—it wanders back and forth between performing as an ordinary lexical verb and as a sort of modal. For instance, it is used with both marked and unmarked infinitives, and it may be used with or without DO-support:

I dare have spoken/told is a use consistent with treatment as a full modal—except that every instance of such use I find (in a quick-and-dirty survey on Google Books) employs the present form in a past sense, as your example does. This suggests that the few authors who used it (all such uses I found appeared in the last half of the 19th century) were influenced—and somehow confused!—by the conventional of use of the “perfect infinitive” to backshift past modals employed in a present sense, as when “I might do this” is backshifted as “I might have done this”.

It’s a fascinating phenomenon, and I am glad to have had it drawn to my attention. But it was never common, and for practical purposes you may ignore it.

Those now all sound wrong to the modern ear. In contemporary English, that should just be one of:

Of those, the second may be preferable. Notice how dare can be used without a to-infinitive but just a bare infinitive, where it acts more like a modal verb.

The OED gives only one citation using a “perfect infinitive” with dare, and this citation is with a bare infinitive (not a to-infinitive) complement:

Perhaps it is more normal to say to have dared do something than to say dare (to) have done something.

Dare is actually a somewhat complicated verb with a complex history. The OED says of it:

Etymology: One of the interesting group of Teutonic preterite-present verbs, of which the extant present is an original preterite tense: see can, dow, etc.

The original 3rd sing. pres. he dare, and pa. t. durst, remained undisturbed to the modern period, in which the transitive senses (B. II.) were developed; but early in the 16th c. the new forms dares, dared, appeared in the south, and are always used in the transitive senses, and now also in the intransitive sense when followed by to. In the original construction, followed by the infinitive without to, dare, durst are still in common use (esp. in the negative ‘he dare not’, ‘he durst not’); and most writers prefer ‘he dare go’, or ‘he dares to go’, to ‘he dares go ’. The northern dialects generally retain ‘he dare, he durst’, and writers of northern extraction favour their retention in literary English when followed by the simple infinitive without to.

Dare has an irregular simple past tense durst that you will sometimes read in literature but which is today preserved mostly in regional English only.

In older works you can also find durst used as a past participle, or used in places traditionally analysed as past subjunctive or conditional.

The OED also notes that the present-tense form dare is occasionally “carelessly used for the past dared or durst”. This seems to have been more common during the 19th century. Some of the OED citations from then of this are:

I would advise against using dare as a past tense form. If you still wanted an old-time feel to it, you could use durst. You can find durst have used in the 17th and again in the 19th centuries. The 17th-century data isn’t very good, but here is a Google N-Gram starting from the 18th: 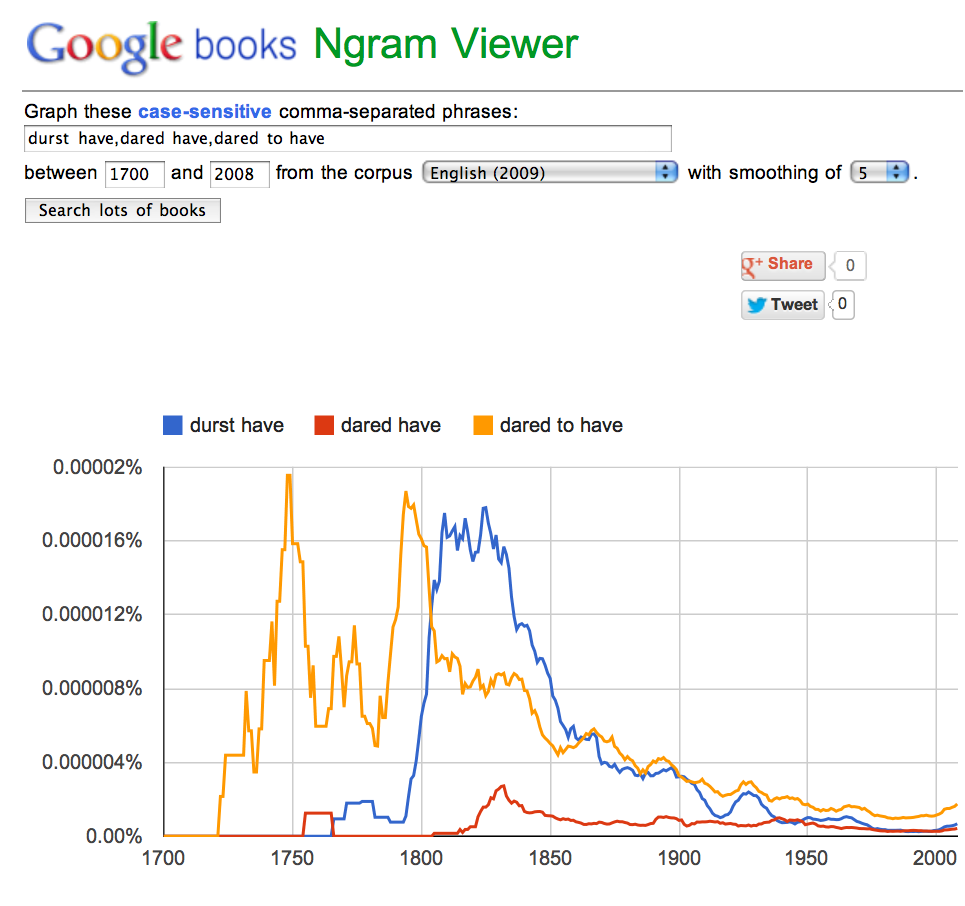 However, once you add have dared to the mix, everything else flatlines: 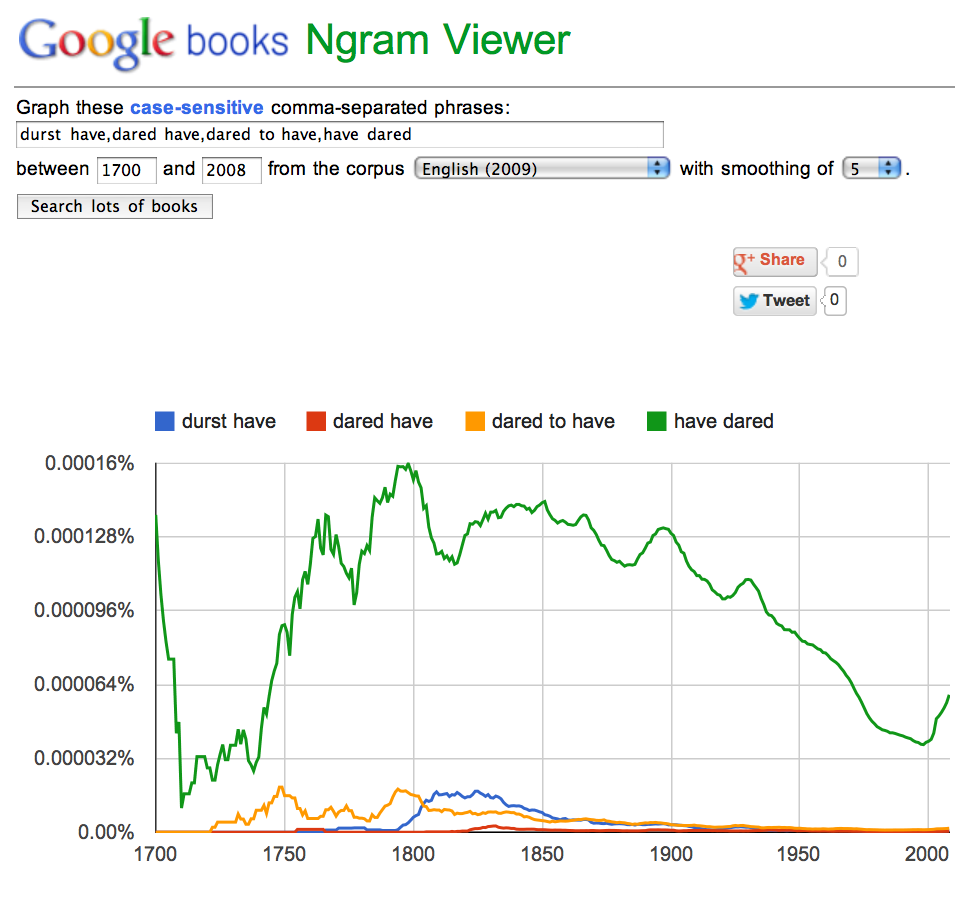