Plural or singular when stating that an amount is enough

A colleague of mine corrected the following sentence in a text I had written:

A handful of iterations was generally enough for convergence.

According to her it should be:

A handful of iterations were generally enough for convergence.

I am, however, confident that my original usage was correct, but I am unsure how I should motivate this.

EDIT: What made me think it was singular was not "a handful of". I thought it would be correct to say Five iterations is enough. because it is a statement about the number of iterations rather than the iterations themselves. When googling to find an answer I found a television series called Eight Is Enough. Is that correct because the noun is left out? Compare the sentences: Three friends are ideal. and Three friends is ideal. I would have thought that the first sentence means that there are three persons who are ideal friends, while the second sentence means that three is the ideal number of friends to have. But maybe my intuition is really off here.

EDIT2: Here it is stated that:

*Subjects expressing periods of time, amounts of money, or quantities may take either singular or plural verbs depending on whether represent a total amount or a number of individual units. For example, "Four weeks is not enough vacation time" and "Two days have passed since I asked for your response."

Isn't the first example here quite similar to mine?

After your edit, the question becomes one of whether a group of things can be taken as a collective singular, such as in this question, which asks such things as whether a dozen somethings “is” enough.

The answer is that it can be singular if you are thinking of it as one thing as a whole, just as in:

Twelve miles is much too far for me to walk before lunch.

In that sort of sentence, you get agreement like this:

It is only when you logically group them as one thing that they take singular agreement. By doing so, that is what you are conveying.

But perhaps your friend does not like it when the council is decided on something, as opposed to when they are divided. :)

Your friend is right, and you are wrong.

When you have a premodifier like a lot of, a number of, or a handful of preceding the head noun, the verb continues to agree with that head noun, instead of with the notionally singular a lot, a number, a handful, which functions more like a red herring than anything else.

Ok, seriously, these premodifiers are really acting like adjectives, not like prepositional phrases. That means the head noun remains the head noun, and there is no change to agreement:

Although there is a bit of room for variation here, depending on just what the writer is thinking, there is a clear dominance of the plural continuing to be used after a handful of men in this Google N-Gram chart: 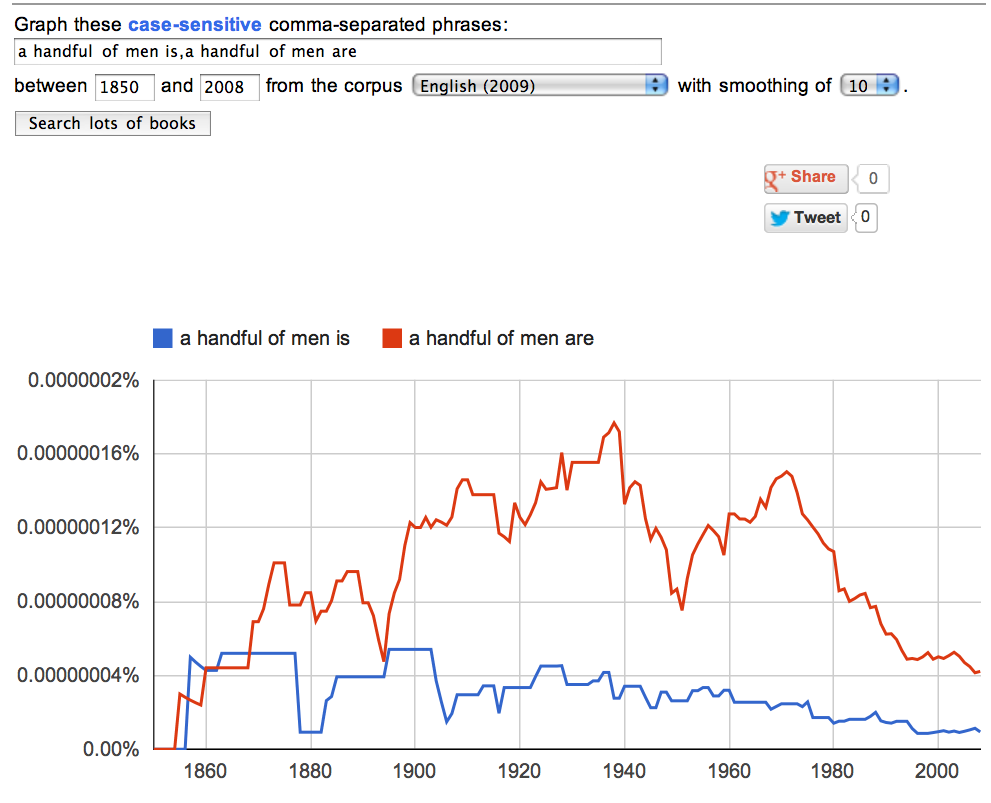 In this case, the correct grammar is

A handful of iterations was generally enough for convergence.

This is because it is not true that each iteration was enough for convergence. You need the whole handful to obtain convergence. Thus, the verb was must agree with the noun handful.

That one is actually really tricky.

If you used a numbering word, it would be clear:

If the thing before the of was a singular physical container, it would be clear:

The weird thing here is that the exact same phrase requires a different verb if it's metaphorical (because then it's mapping to a small number) than if it's literal:

As long as that last handful is literally that: a hand, full of jellybeans. Then it's like the jar or box.

I would say the "handful" is the head noun and that the "of iterations" then becomes the post-modifier seeing as how many post-modifiers are prepositional phrases. Handful as a collective noun needs to meet the three main tests of collectives-are they at the same place, doing the same thing at the same time. In other words,they are acting as a single unit rather than acting individually. In this case, I see them as one unit and would allow the single verb tense.

A handful of iterations was generally enough for convergence

"Handful" is singular. It is the subject and therefore requires a singular verb. "Iterations" is the object of the prepositional phrase and has no influence or input. The only time the the singularity or plurality of a noun inside of a preposition has any influence is if the subject is one of six indefinite pronouns that can be singular or plural. It is then that the use of "iterations" would determine that the subject was plural. However, this is not the case. The sentence was correctly written from the onset. Good for you!

The verb always agrees with the subject. In this case the subject is "a handful" and the prepositional phrase is "of iterations." A handful is singular because although it is talking about many things, it is referring to them as one—as a whole. So, the answer is: "A handful of iterations was generally enough for convergence."

Not the answer you're looking for? Browse other questions tagged grammatical-number verb-agreement quantifiers or ask your own question.

0
Why this sentence use ''is''?
0
Question about correct verb
6
Subject–verb agreement — two schools of thought?
6
Does modifying a collective noun with a number make the subject plural?
5
Shouldn’t we use "lots of" with plural nouns and "a lot of" with singular ones?
5
"1 or 2 friends is enough" or "1 or 2 friends are enough"

2
How should we treat a plural term that refers to singular term?
6
Subject–verb agreement — two schools of thought?
0
Verb in context: singular or plural?
2
Subject-Verb Agreement with "years" (measurement?) as subject?
0
Is there a shorter/better term for disagreement in number than singular-plural mismatch?
0
Singular vs. plural when the subject has multiple objects in it