In Isaac Asimov's Foundation series, in several places he describes people having a "sallow complexion".

According to Collins dictionary:

(esp of human skin) of an unhealthy pale or yellowish colour

Unfortunately I'm not a native English speaker, and from the context I can't decide whether he means a very pale Caucasian or rather an Asian.

Not that it really matters for the comprehension of the story, but at first sight I thought it was a misspelling of shallow and this aroused my curiosity, now I have to find out.

Given the author and the era in which he wrote, you should interpret this as meaning "pale Caucasian".

The fact that Europeans of the past were not as light-skinned as many of them are today is something that Europe's political and academic establishment choose to gloss over if not deny outright, but then again you see a film in which a mixed race person plays the role of a royal, such as Angel Coulby playing the role Queen Guenevere in King Arthur, or Sophie Okonedo playing the role of Margaret of Anjou in the Hollow Crown. Some of those thespians know better.

Because yellow skin is one of the features of jaundice the word became associated with illness and unhealthy looking skin even if the person was not ill or had jaundice.

There is no hint of sickliness in the etymology of sallow. The word appears in Old English as salu or salo, and could mean "dusky" or "dark" or "grayish greenish yellow." Salu (or salo) is akin to Old English sōl ("dark, dirty"), Old High German salo ("murky, dirty gray"), Old Norse sölr ("dirty"), and even Sanskrit sāra or sāla, which carries the basic meaning of "dirty gray." Sallow, however, has for much of its history been used specifically to describe the skin or complexion of one who is unwell.

Origin and Etymology of sallow 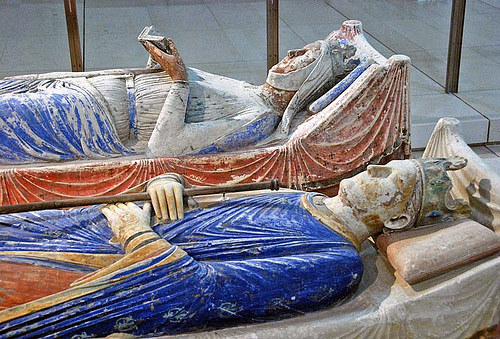 The effigies of Eleanor of Aquitaine and Henry II at Fontevraud Abbey, France.

Henry's complexion is what would be described as sallow. Eleanor's complexion would be ruddy. Sophie Okonedo playing Margaret of Anjou is not that far of the mark.

The word sallow probably referred to people who in current times would be classified as black and the term carried over the their light-skinned descendants just as today the word black is used to label people showing visible signs of black African ancestry even when they are quite light-skinned, such as Meghan Markle.

Paintings of sallow-complexioned people are usually assumed to be those of pink-skinned white people in which have darkened or deteriorated over time and need to be restored.

A good example of people in the public eye who can be described as sallow or display a sallow cast to the complexions every now and then are Viktor Orban, Maria Vladimirovna and Maria Sharapova.

Not the answer you're looking for? Browse other questions tagged meaning ambiguity or ask your own question.

5
Does "sallow complexion" include bad meaning?

5
Does "sallow complexion" include bad meaning?