The "ask". Is this a buzzword or just bad grammar?

The ask, or my ask is used in places such as:

My ask of you is that you fill out the true and false questions first.

Similarly, I have see the ask...

Why are people using this? I believe it is a buzzword and grammatically incorrect but we still see it. But my issue is I can't back up why I think it is wrong, so I just need clarification if I am wrong. If I'm right, why is it incorrect?

Surprisingly enough, ask as a noun meaning an

has been around for more than a thousand years — the verb ask dates from 885 ᴀᴅ, so a bit older than the 1000 ᴀᴅgiven below for the noun. Here are the first and last citations from the OED:

However, a draft addition from 2005 points out a recent use, which it labels colloquial, originally Australian, and chiefly Sport lingo:

With modifying word or phrase, as a big (also huge, etc.) ask: something which is a lot to ask of someone; something difficult to achieve or surmount. Cf. tall order at tall adj. 8d.

The citations for this sense date only to 1987, and the two most recent ones given are:

It sounds extremely colloquial to my ear, something of recent and casual coinage (although as I showed above, it is actually very old), so I would advise against it in formal writing.

The Tumblr website allows blog owners to add a box where readers can send them a question. It's referred to as "an ask box".

Rather than saying "ask me a question", often Tumblr users will instead say "send me an ask", referring to the act of sending the question rather the act of asking. 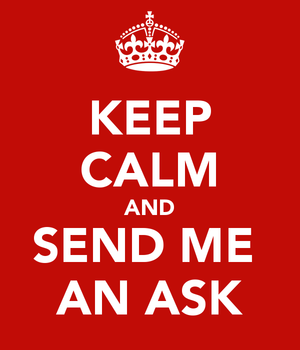 "send me an ask" is also used as a tag for posts, such as these:

I need someone's honest opinion. Or someone to back me up with my decision. Or to tell me my decision is a bad one. Please? Send me an ask? It’s about me taking a semester off… So it isn’t super important but I need to come up with a good argument to give to my dad.

Someone send me an ask ill love you for it tho.

feel free to send me an ask and ask whatever, i will be your friend!!!

accepting all types of asks! Hey, all of you kind followers! whats up?

This particular use sounds strange and unnecessary to my ear, where ask as a noun has essentially replaced question.

I would guess it is the style of language used by some young people who want to show that they have their own style of speaking. I would say that this way of speaking might be seen by some as uneducated.

Not the answer you're looking for? Browse other questions tagged grammar sentence or ask your own question.

2
"The book I've read that feels closest to this book is..."
3
Capitalizing First Letter of Word in Continuing Dialogue
9
Problem with backshift in reporting clauses
2
"Ask" vs "ask for"
3
Grammar questions regarding an excerpt from The Giver