What is the origin and meaning of the term 'Chubby Chubs'?

I have this expression stuck in my head and can't figure out where I've heard it. I think it can be a term of endearment for 'plump babies'. But not sure if it has any other connotations because of the terms 'chubby' and 'chub' being linked to the gay scene.

These are the only references I found about this on the web:

Etymonline has an entry for chubby meaning "like or resembling a chub". A chub is a type of fish, notably short, thick and stocky. It cites its appearance as in 1610, following chub being applied to people around 1560.

Chubby-chub is an alliterative/reduplicative term of endearment for someone who is similarly stocky.

The OED has the adjective chubby, meaning short and thick like the river fish called chub, from 1611, but notes it is obsolete. Meaning round-faced or plump and well-rounded, they have it from 1722. For combinations, they have chubby-faced from 1826 and chubby-headed from 1884.

Searching Google Books, I found Chubby-chops in the 1769 The History And Adventures Of An Atom by Tobias Smollett, as a translation of the Italian name Gozzi:

A few pages earlier it uses Chubby-cheeks as a translation of the Roman name Malici: 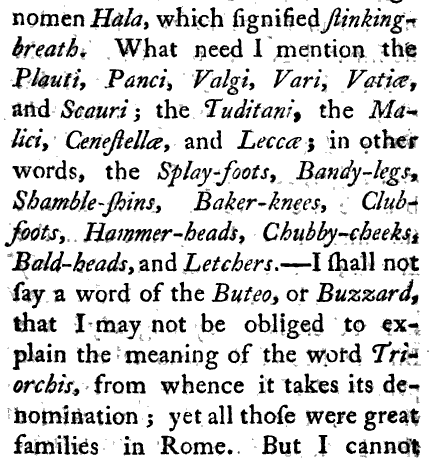 This is a much later variation. The earliest I found via Google Books is Rootabaga Stories (1922) by American author Carl Sandburg, in "The Wedding Procession of the Rag Doll and the Broom Handle and Who Was in It":

If anyone who loved you at all ever read you the wonderful story of "The Wedding Procession of the Rag Doll and the Broom Handle and Who Was In It" by Carl Sandburg (1967), you would remember that next to last (after the Musical Soup Eaters and before the Sleepyheads) came the Chubby Chubs, who "marched on their chubby legs and chubby feet, and chubbed their chubs and looked around and chubbed their chubs again."

It was a grand procession, don't you think so?