What connotation does "to fork one's repo" have?

In a recent news item, an employee was fired partly for making jokes about "big dongle" and "forking repos", which were alleged to be inappropriate sexual jokes. The employee admitted the dongle joke but defended the other joke,

While I did make a big dongle joke about a fictional piece hardware that identified as male, no sexual jokes were made about forking. My friends and I had decided forking someone’s repo is a new form of flattery (the highest form being implementation) and we were excited about one of the presenters projects; a friend said “I would fork that guys repo” The sexual context was applied by Adria, and not us.

What inappropriate meaning can be mistaken from "forking one's repo?" and how can it be taken that way? Forking sounds like a legitimate terminology in software development.

If you need to make a vulgar joke, it doesn't really matter if the rest of it makes sense. Just being made in context of other vulgar jokes may be enough. (Whether it was intended as a joke, vulgar or otherwise, is another matter.)

Forking a repo is legitimate software terminology. It means to take a copy of another person or group's software (repository) so as to continue development independently. There may be the intention of contributing your changes back at a later date, or the fork may represent a split or schism in the developer community, with different aims.

As an extreme example, here's a diagram of Linux distribution forks, from Wikipedia:

Forking someone's repo certainly can be praise. It's validation not only that their software is useful for you, but that you want to help continue it's development, and often voluntarily.

This use of fork has been in use since 1980 and the diagram shows it naturally follows on from earlier uses such as a fork in the road.

In 1605 J. Sylvester wrote the earliest known example of this particular fork as a verb:

I think the inappropriateness of "forking one's repo" stems from the way it is phrased. I'd never seen fork applied to a repo before (maybe others have), only to projects, so for example someone might say:

The way they've phrased it, though, is more like:

Which does sound a lot more sexual, as you can easily imagine repo standing for any "forkable" body part.

Given that telling women that they're fuckable is a widespread sexist "praise" (it equates their value with their sexual desirableness), given that the fired guy considered telling that someone's repo was forkable was a praise, and given the close correspondence between the two idioms, I cannot see how saying it the way they did could not be sexist, though I doubt they were conscious of it.

Furthermore, in the specific case of the fired guy saying:

The sexual context was applied by Adria, and not us.

It is incorrect. Adria said:

He said he would be interested in forking the repo and continuing development.

That would have been fine until the guy next to him […] began making sexual forking jokes.

So she clearly didn't ascribe a sexual innuendo to the original use (though, as shown by the beginning of my post, I think it is there, albeit subconsciously).

What I would like to know is how did they go from "forking someone's repo" to a sexual joke about big dongles without an intermediate step of an overtly sexual forking joke. It's not like forking a project (or a repo) and hardware dongles have anything in common that would link them.

Nothing in this episode warrants anybody losing their job or getting rape and death threat.

Intended or not, the interpreted pun or bowdlerised euphemism concerns the word fork and is unlikely to have anything to do with repo. While Urban Dictionary has a number of entries (NSFW) for the use of fork as a slang term, the mixed voting suggests niche usage.

Forking is when you make a new branch on a tree of some kind, e.g. a timeline. "Forking a repo" means to create a new branch on a source code repository. It probably sounds sexual because "spooning" is sexual. Spoon, fork...you get it. 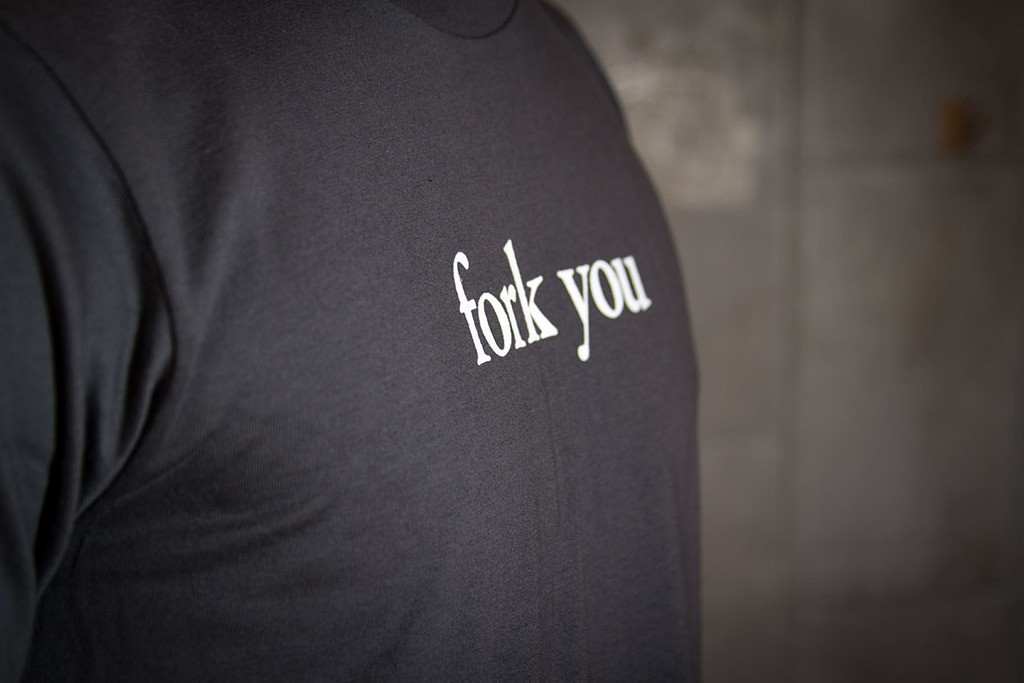 This kind of wordplay has been used before, such as by github using "fork you" ("fuck you") and "fork me" ("fuck me"), when it was into brogramming ("bro" + "programmer") style humor.

In IT context the meaning is quite obvious: it's branching of some codebase.

The usage 'fork someone's repo' sounds already weird, because the repository is the set of many branches, which can be forked etc. and usually repository belongs to the company and can't be attributed to single person, like the branch.

Instead of the similarities between 'fork' and other words, 'fork' in the IT context means 'to multiply', which is already close to 'breed'. 'Repo' is close to 'codebase' which, when referring to the person, can mean 'genetic code' as well.

The quotation makes no doubts about the intentions of the speaker. He actually admits going around company's policy about sexual jokes.

Not the answer you're looking for? Browse other questions tagged idioms slang connotation software appropriate or ask your own question.